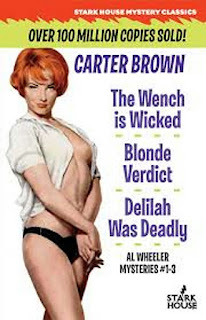 I started reading Carter Brown books when I was in high school, and I hate to think of how many decades ago that was. I’m still reading them all these years later, and thankfully, I’m not the only one. There are enough Carter Brown fans out there for Stark House to reprint the first three novels featuring Lieutenant Al Wheeler in a very handsome trade paperback collection. It just so happens that Al Wheeler was the narrator/protagonist of the very first Carter Brown novel I read, ’way back when (I think it was THE UNORTHODOX CORPSE, but I’m not 100% sure of that), so I was very happy to have the chance to read THE WENCH IS WICKED, the book that introduced the character. 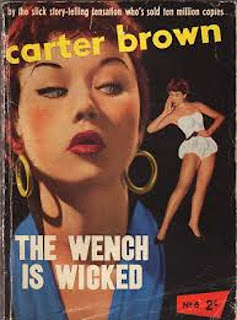 This novel was first published in 1955 by Horwitz Publications in Australia and has never been reprinted in the United States until now. Al Wheeler isn’t quite the same character in this one that we know and love from the Signet editions that would appear on every paperback spinner rack in America a few years later, usually with great covers by Robert McGinnis. For one thing, Al doesn’t work for Sheriff Lavers, although there is a character named Lavers in this book who’s a politician. Maybe he gets elected sheriff at some point in the series. Instead Al is a detective lieutenant on the police force of an unnamed California city not far from Los Angeles. In later books this locale is known as Pine City. Nor does he drive an Austin Healy sports car, but he does rent an MG for part of the book. There’s no sign of his dimwitted sidekick Sergeant Polnick.

But the wisecracking, the chasing of beautiful dames, the hardboiled attitude, and the deceptively keen mind that can solve multiple murders, those are all in place in this first adventure, which involves a murdered playwright whose body is found at the bottom of a gravel pit. The playwright is involved with a movie crew from Hollywood that’s shooting a Western in the area, so the suspects include a couple of gorgeous actresses, a leading man who’s prone to violence, an unsavory character actor, a director who may or may not be a drug addict, and a cameraman rumored to have an unhealthy interest in underage girls. So Al has plenty to sort through, including two more murders, before a suspenseful showdown with the killer in that same gravel pit.

Alan G. Yates, the author behind the Carter Brown pseudonym, was an Englishman who lived in Australia, and his early books, although set in America, contain the occasional bit of description or dialogue that doesn’t ring true. As a result, when Signet began reprinting the books, they hired an American mystery writer to go over the manuscripts and revise them slightly. This practice lasted for only a few books, however, as Yates got to be very good at sounding American. Since THE WENCH IS WICKED was never reprinted over here, there are a few examples of things that aren’t quite right, such as Al’s car having a bonnet rather than a hood. Things like that don’t bother me at all; in fact, they kind of add to the book’s charm.

Many of the Carter Brown books have pretty intricate plots, while others are fairly thin. This one is in the middle, complex enough to maintain the reader’s interest all the way through but not terribly difficult to figure out. The main appeal of these books for me has always been the fast-paced, breezy style and the likable protagonists. THE WENCH IS WICKED delivers quite well on those scores. It’s just great fun to read, and I give it and the Stark House collection that includes it a very high recommendation.

Nice write up. I'm waiting on my copy to arrive.