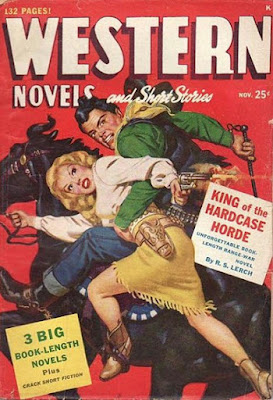 WESTERN NOVELS AND SHORT STORIES was never considered one of the top Western pulps, but there were stories by good authors to be found there, plus the occasional good cover like this one. H.A. DeRosso has a story in this issue, as does veteran pulpster Paul Chadwick, writing as John Callahan. What little I've read by R.S. Lerch has been pretty good, and while I've never read anything by John Latham that I recall, he published several novels as Ace Doubles, so he must have been an entertaining writer.
Posted by James Reasoner at 5:00 AM

I can't imagine that's the best way to carefully aim, but clearly the circumstances are a bit frantic.

A great cover, full of movement.
Between the way the faces are done and the extended display of gams, it looks like an Anderson to me.
Anybody have a clue?

Thanks for the steady stream of pulp covers, James. They're a weekend highlight for me.

Anderson would be my guess on the cover art, too. A friend who actually owns that issue mentioned that there's no artist credit in it. But he thinks it's Anderson, as well.

...as does veteran pulpster Paul Chadwick, writing as John Callahan.

I think that you mistook Paul Chadwick with Joseph Chadwick who, as pseudonym, had John Callahan (See here under).

Historical Note
Joseph Chadwick (1909 - ) was born in York, Pennsylvania. He began his writing career in 1935 with the Chicago Daily News Feature Syndicate. He became an author of over ninety-one books, most of them westerns, suspense and espionage novels. His pseudonyms include John Callahan, Jim Conroy, Jim Layne, Jack Barton, Jud Blame, and John Conway. He was managed by the Lenniger Literary Agency.