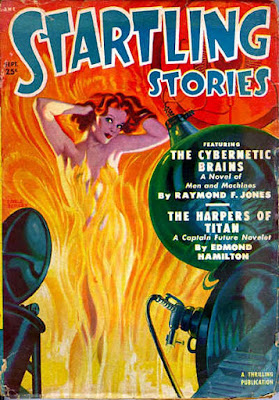 Simon Wright, the Living Brain, takes center stage in "The Harpers of Titan", a Captain Future adventure from the September 1950 issue of STARTLING STORIES. In order to keep a bloody rebellion from sweeping across one of Earth's colony worlds, Simon has to give up his brain-in-a-box existence and allow his brain to be transplanted into the body of a slain political leader from that world. The would-be rebels have a terrible secret weapon that if unleashed will not only wipe out the Earth colonists but possibly all life on the planet.

This story lacks the cosmic sweep of the other stories I've read so far in CAPTAIN FUTURE, MAN OF TOMORROW, but it's really beautifully written, with a real sense of poetic melancholy. It's not easy to combine a poignant examination of what it means to be human with a slam-bang SF adventure yarn, but Edmond Hamilton (with a possible assist from his wife Leigh Brackett) pulls it off in "The Harpers of Titan". I'm really enjoying these tales and will be sorry to see the book end.

I've read some of the Cap future but I don't think I've read this one.

That was the direction Hamilton was taking with his latter day work..."What's It Like Out There?" being apparently the kind of thing he Wanted to write by the end of the '30s...

I believe I read somewhere that Leigh Brackett wrote the six novelet Captain Future stories. They do feel different from the novels. More lyrical and with a strong emphasis on the inner lives of the characters.

My hunch is that Brackett and Hamilton both had a hand in these. Some of them had a real epic feeling to them that reminds me of Hamilton, but they're definitely more introspective than the early Captain Future stories.