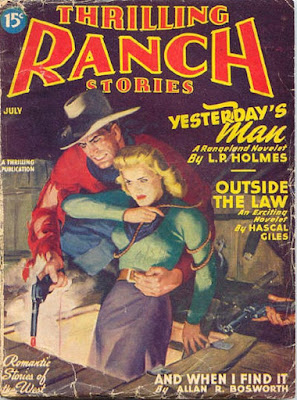 This issue of THRILLING RANCH STORIES sports the usual good cover by the apparently tireless Sam Cherry (honestly, when did the man sleep and eat?), and inside there are stories by some top names in Western fiction: L.P. Holmes, Allan R. Bosworth, Joseph Chadwick, Louis L'Amour, Nels Leroy Jorgensen, Hascal Giles, and Joe Archibald. Okay, maybe not all of them are that well-known today, but they were all good solid pulpsters.
Posted by James Reasoner at 5:30 AM

This goes to a point you've made in the past, James, that even after Hondo, Louis L'Amour was pretty much "just another western pulp writer" until the Bantam PR machine got behind him. I really like his pulp fiction from the '40s, especially those novellas that were lightly expanded into several of his 1950s paperbacks. But you know we're Pre-Bantam when Louis gets bumped off the cover by Mr. Giles and Mr. Bosworth. What a business.

I'd say that in 1947, Bosworth and L.P. Holmes were both held in considerably higher regard as Western writers than L'Amour. Don't know about Hascal Giles, but Leo Margulies seems to have liked him. But Bosworth and Holmes had been selling regularly to the top pulps for two decades, and L'Amour had been published almost exclusively in the Thrilling Group pulps. I like those pulps more than some pulp fans, but they weren't considered in the same league as the Street & Smith and Popular Publications pulps. If it had been me deciding who was going to be on the cover of that issue, I'd have replaced Giles with Joseph Chadwick or Nels Leroy Jorgensen.