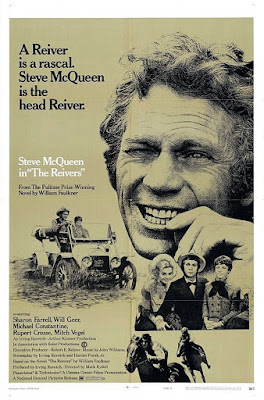 I saw THE REIVERS when it was new, or almost new, anyway, since I remember watching it at the Corral Drive-In, which meant it was in its second run and had already played at what we called the “inside shows”. Anyway, I watched it again recently for the first time since then and was curious to see how it was going to hold up.

The answer is, pretty darned good. This is a coming-of-age yarn, set in  Mississippi and Memphis in 1905 and based on the final novel by William Faulkner. In the spirit of full disclosure, I’ve never read the novel (or much of anything else by Faulkner, for that matter), so I don’t know how faithful the movie is to it. The protagonist and narrator (in voice-over, from the prospective of a much older man, voiced by Burgess Meredith) is 11-year-old Lucius McCaslin, played by Mitch Vogel, who does a good job in a part that surely would have been played a few years earlier by Ronnie Howard; Vogel bears a distinct resemblance to Howard. Lucius comes from the most prominent family in the small town where he lives, and the patriarch of that family, played by the fine character actor Will Geer, buys the first automobile the area has ever seen.

The car proves to be too great a temptation for the family’s high-spirited handyman and caretaker, Boon Hogganbeck, played by Steve McQueen. While everybody in the family is out of town except for Lucius, Boon takes the car and convinces Lucius to go along with him to Memphis, where they’ll have four days of adventuring. Lucius’s mixed-race cousin, played by Rupert Crosse, invites himself along.

Naturally, a lot happens in that four days. Boon and Lucius stay at a whorehouse where Boon’s girlfriend is one of the soiled doves (Sharon Farrell). Comedy, violence, racism, corruption, and horse racing ensue. Although there are certainly some dark undercurrents, the movie maintains a fairly light tone all the way through, and it could almost be a warm-hearted family comedy/drama except for some language and nudity. It manages to be pretty warm-hearted anyway.

THE REIVERS is very much of its time, the sort of movie that wouldn’t be made today, or at least not in the same way. There’s a lot in it that wouldn’t pass muster with today’s more sensitive, politically correct audiences. But I thoroughly enjoyed it and am glad I watched it again after nearly 50 years.
Posted by James Reasoner at 4:00 AM

I saw this at the inside show on its first run. Liked it quite a bit. I've read the book, too, but I don't remember much about it other than that I liked it, too, even if it's not top-shelf Faulkner.

Loved this movie as a kid. I saw it in the theater and then every time it was on TV though they cut out all the "good" parts. I bet I haven't seen it in thirty years. I'm going to have to give it another watch. Sounds like it will hold up for me as it did you, James.