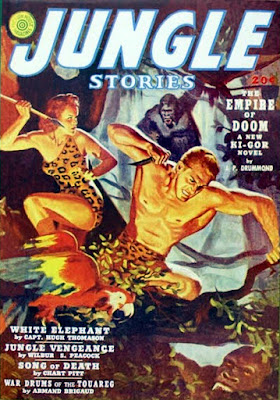 I continue to be stubborn and read the Ki-Gor stories in order, which brings us to "The Empire of Doom" in the Winter 1940 issue of JUNGLE STORIES. I'm convinced that the same author who wrote the previous installment, "Ki-Gor—and the Paradise That Time Forgot" turned out this one as well. The style is the same, and Ki-Gor and his beautiful redhead American wife Helene still live on the same fortress-like island in the middle of a river and hang around with their Pygmy buddy N'Geeso and Marmo the elephant.

Ki-Gor's other main sidekick, Tembu George (really former railroad porter George Spelvin, who's now the chief of the Masai), shows up as well, and it's a welcome return. George is a great character: smart, brave, funny, loyal to his friends, and just an all around great guy. He has as much or more to do with saving the day than Ki-Gor does in this one.

Unfortunately, there's not a lot of plot. Ki-Gor, Helene, and George get involved in the power struggle between the ruler of a neighboring kingdom and his ambitious nephew. That's about it. There are a couple of decent battles, one early and one late, and not much in between to amount to anything. The writing is okay for the most part, there's just not enough story.

So far the tone of this series has varied from goofy super-science to Nazi-fighing action/adventure to the more mundane fare of the last few stories. I like all three protagonists, though, and that's been enough to keep me going. Better stories will be coming along soon.

all the great titles are taken

If I recall correctly, you have three or four more soft ones before you hit a truly good entry in the series.
And twelve more to go before you hit the amazing, hyperbole-defying wonder of Stalkers of the Dawn World.
Keep swinging (on that vine),

I see there is an Armand Brigaud back up story or probably a novella. Give him a try. He supposedly was an American with a French father and attended a French military academy and served in the French Army in Africa. Cashiered out for wounds in combat, he became a writer. The stories have the feel of authenticity about them. Some are lost race, straight adventure, a couple of Tarzan clones, one lost world story with dinosaurs. Brigaud is in my top 10 if not top 5 pulp writers.

No weekend pulps?
Everything okay, James?

Yeah, just dealing with real-world issues. Which aren't nearly as pleasant as the fictional worlds I prefer. The pulps should be back next weekend.

James, I missed them too! But the great JUNGLE STORIES post helped make up for the missing pulp articles.