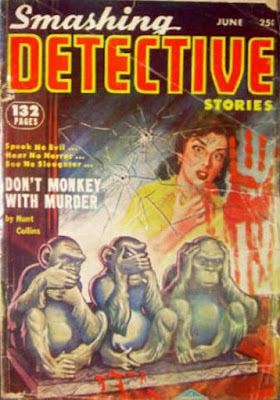 Another of the Columbia pulps edited by Robert W. Lowndes, and as usual, he's managed to get some good authors to mix in with others you've never heard of, and neither have I. In this issue of SMASHING DETECTIVE STORIES, you've got Carroll John Daly with a Race William yarn, the prolific Western pulpster who also wrote mysteries Donald Bayne Hobart, and Hunt Collins, author of the cover story, who was really Evan Hunter. Maybe not great stuff, but I'll bet it was fun. The cover scan is from the Fictionmags Index.
Posted by James Reasoner at 5:00 AM

Lowndes was pretty much the only editor buying from Daly by then. Which must've felt Very Bitter indeed to Daly, given how much Spillane owed him...only Spillane was able to speak to modern readers in the '50s in a way Daly mostly couldn't, even beyond Daly's kind of antiquated adolescent's view of sex (as opposed to Spillane's even more unbalanced take that was at least still cognizant of sex's basic importance).

Where Bailey is actually occasional sf writer (and I think kind of mild deal in fandom) John Berryman (not the well-known poet by that name), and Kanitz apparently wrote for HARLEQUIN, the romance fiction magazine they published in the '70s. That the rest of the obscurer writers seem to have split there published work between Columbia magazines and sf and a few western and/or CF magazines might well suggest that at least one is Lowndes himself or they might be other ex-Futurians and friends of the old Futurians...inclding Kanitz.

Or even Their stories...

Evan Hunter under his Hunt Collins name had a nice series of novelettes in Smashing's sister pulp Famous Detective featuring a tough NYC private eye named Guthrie Lamb. Lamb was a milk drinker and kept a bottle or two in his office refrigerator. "Some guys I know keep rye instead. Milk is cheaper, and I see straighter when I'm not drinking rye. Not that I'm a teetotaler; far from it. I just think alcohol and guns don't mix well.

"Besides, I like milk. And I once had to smash in a guy's skull with the butt of my forty-five because he thought a grown man drinking milk looked funny. You should see how funny he looked with his head in bandages."

Hunter remembered Guthrie Lamb when decades later he needed a private eye for a task in a Matthew Hope novel. For that revival Lamb had aged with the years but still carried a forty-five in a shoulder holster. I thought it was a nice tip of the hat to Hunter's pulp past.

I posted this a minute ago and saw a typo and so deleted and reposted.