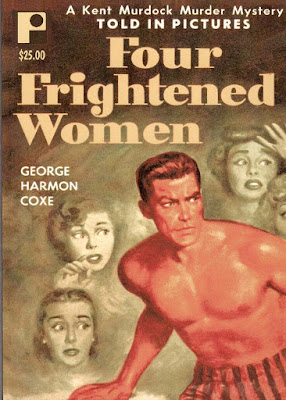 I’m a longtime fan of George Harmon Coxe’s mystery novels—they were on the shelves of all the public libraries around here when I was growing up—but I wouldn’t have even been aware of this graphic novel adaptation of his 1939 novel FOUR FRIGHTENED WOMEN if not for my buddy Scott Cupp, who graciously passed along his copy to me.

Originally published by Dell in 1950, this is a reprint from 2010 with an introduction by publisher Greg Theakston. The story features Coxe’s most famous character, Boston crime photographer Kent Murdock, and actually comes off a little like a classic British country house mystery. Murdock comes to the estate of radio comedian Ted Bernard to take pictures of him and his ex-wife, glamorous actress Irene Alexander. Of course, there are a whole lot of other people on hand—Bernard’s adopted son, his ex-wife’s agent, a Broadway actress, a chorus girl, his drunk, washed-up jokewriter, his niece and her fiance, a sinister piano player, a private detective (Jack Fenner, the protagonist in several other of Coxe’s novels), and probably some others I’m forgetting. With that many suspects—I mean guests—on hand, you just know there’s going to be a murder sooner rather than later. And when there is, the killer tries to frame Murdock for it.

This is pure hardboiled pulp. Everybody smokes and drinks constantly, and the wisecracks and tough guy patter are always flying. I loved it. This is the kind of stuff I grew up on, and I never get tired of it.

As Greg Theakston points out in his introduction, nobody knows who wrote the script or did the art for this adaptation. The art is simple but effective, and the script keeps the complicated plot understandable, which was probably much easier in the original novel version. (I’ve never read the book, by the way, and I doubt if I ever will, since I know who the killer is now.) The cover art is by the always good Robert Stanley, who did a bunch of paperback covers, including some of the Mike Shayne novels. This sure puts me in the mood to read some more of Coxe’s novels. I might just do that.
Posted by James Reasoner at 5:00 AM

I've liked every George Harmon Cox book I've ever read (and he wrote a lot of them!). I have not seen this graphic adaption before your fine review.

Fascinating. I never knew about this one. I always appreciated Coxe and read him when I was coming up since, as you say, for a period there he and a few others like John Creasey seemed to own the public library mystery section. I always found Coxe thoroughly competent yet with nothing to distinguish his work from the more colorful hardboiled guys like Cleve F. Adams, Carroll John Daly or Roger Torrey. But in 1950 ol' Flashgun was on a real media blitz: The Casey novels by Coxe,a movie, a radio show, a radio tie-in novel by Edward S. Aarons and this graphic novel. I guess the timing was just off as 1950 saw Mr. Spillane suck all the oxygen out of the market with is phenomenal success.

I don't think I've ever read a book by George Harmon Coxe, though his name is familiar. And I certainly never knew that a comic book graphic version existed. Wow. Interesting. I wonder why more mystery novels aren't adapted in this way. They would be fun to read and collect.

I see some similarities between Coxe's books and Dresser's Mike Shayne novels. Both combine hardboiled with elements of classic fair-play detective novels. Of course, in the early Shayne novels there's screwball comedy as well, making them almost a sub-genre of their own.

But more mystery novels were adapted this way, Yvette. And they are read and collected ... by people who can afford them, that is. When I was growing up in Britain in the 1950s, the Amalgamated Press had a two-a-month series of digest-sized comic books called the Super Detective Library. It ran 64-page adaptations of stories by Edgar Wallace, Leslie Charteris (the Saint), Victor Canning, Bruce Graeme (Blackshirt) and others. It also re-formatted newspaper strips for some of its issues (e.g. Rip Kirby, Lesley Shane). I didn't buy them too often, mainly because my pocket money was limited. Same-priced text novels in the same format in newspaper-size print made similar entertainment last much longer while my own imagination supplied the scenes as graphically as any artist! I believe I have just one Super Detective Library issue tucked away somewhere -- THE TOFF AT BUTLIN'S by John Creasey.