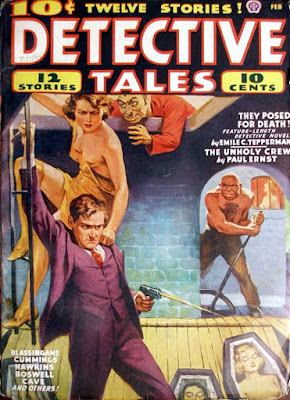 This almost looks like a Weird Menace cover, and sure enough, there are stories by Weird Menace stalwarts Hugh B. Cave and Wyatt Blassingame in this issue. There are also stories by prolific, reliable pulpsters Paul Ernst, Emile C. Tepperman, and Ray Cummings (twice, once under his own name and once as Gabriel Wilson). That's plenty to make me think this was probably a pretty good issue.
Posted by James Reasoner at 6:17 AM

I'm darned if I can figure out what;s going on in that cover.

Cover does look a bit on the creepy side.

My experience reading a different issue of this pulp (Detective Tales) was not great. There were so many short, fast, convoluted stories of the same genre---12---that nothing really stuck out and was memorable, despite a handful of great writers. Anybody have a different experience with this pulp? (Along these lines, I slightly preferred Ten Detective Aces, which had Frederick C Davis Moon Man and moody, deft Paul Chadwick action.)

I'm reading an issue of Argosy (july 7 1934) right now...and I have to ask if there were any more versatile pulpsters than J. Allan Dunn, in terms of adapting his style to any magazine and genre and then delivering the goods in that genre and style. Adventure, Argosy, Dime Mystery, Detective Fiction Weekly, etc. ... his stories and styles change, but the consistency of his tales does not. The Exterminator and Barehanded Castaways (both in Adventure) are two standouts.

I like what I've read by Dunn and really need to read more by him. He did good work in the Western pulps, too. Hugh Cave was very versatile as well, as was H. Bedford-Jones. HB-J didn't do Weird Menace or really hardboiled detective stories, though, and Cave did.

I had a set of DETECTIVE TALES, a little over 200 issues, but I encountered the same problem as Craig Zahler. I ended up getting rid of them all except for the issues starting around 1945 when the magazine started to show the influence of BLACK MASK and DIME DETECTIVE in the forties. It was a different magazine by then and the stories were of a higher quality.

Good to know about Detective Tales---Dime Detective is my favorite detective/crime pulp by far.

James,
Agreed---I put Hugh B. Cave right next to J. Allan Dunn in terms of versatility and quality. Both names are a plus to any magazine in which they appear. I've read great stories, middling stories, and stinkers by H Bedford Jones, and don't think his often disheveled prose is as vivid as that of Dunn nor as crisp and moody and that of Cave.