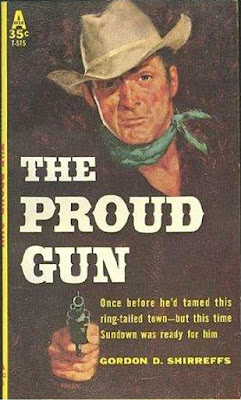 Les Gunnell was once the town-taming marshal of the lawless settlement known as Sundown in New Mexico Territory. He left the marshal's badge to his friend Will Ripley, who also married the woman Gunnell loved, then rode away and took up ranching. Now Ripley is dead, murdered by a shotgun blast, his stepson is wounded, and the buzzards are gathering again around Sundown, in the persons of the vicious outlaw gang the Chacon Boys and ruthless cattle baron Matt Horan. Gunnell doesn't want to go back and take on these killers again, but he feels he has no choice, even though it will almost certainly mean disaster and death.

That's the set-up of THE PROUD GUN, a 1961 Western novel by Gordon D. Shirreffs published by Avon Books. Shirreffs was one of the best authors of hardboiled Westerns from his era, and this is a good novel with a large cast of characters and a fairly complex plot, especially considering that he packs it all into about 40,000 words, I'd estimate. It's a book without many sympathetic characters. Les Gunnell is the protagonist, but he's not a particularly likable guy. Other characters you might expect to survive don't, and it all builds to a pretty bleak climax that, frankly, left me wanting a little bit more. That's my only complaint about THE PROUD GUN, though. As always, Shirreffs vividly renders the southwestern landscape and provides plenty of tough, gritty action. Even second-tier Shirreffs is better than a lot of Westerns. I don't think this novel belongs in the top rank of his books, but it's certainly worth reading.
Posted by James Reasoner at 6:00 AM

I'll have to read this one. Shirreffs is one of the better western writers. I just finished reading FORT VENGEANCE and MASSACRE CREEK both of which were good cavalry vs the indians novels. Next I'll try GUNSWIFT which has some scenes in Yuma Prison, the famous hell hole.

I read every Shirreffs I can get my hands on. Read this one a few years ago and pretty much agree with your take on it, James. My favorite Shirreffs is JACK OF SPADES. Has a great Festival of Death scene in Old Mexico.

Aside from the inimitable Calgaich the Swordsman, my top pick of the Shirreffs novels I've read is the Gold Medal, Ambush on the Mesa.
It delivers all the virtues of both the author and the publisher, but might also end a bit more weakly than a reader would hope.

Honestly, I think that's been my experience with everything I've read by Shiffeffs except Calgaich. The story starts out intriguing, gets gripping as hell with at least one or two scenes that shake me and burn themselves into my memory, then it works its way to a climax that kind of tails off.
This hasn't stopped me from reading the author, of course, but it has become something I look for in his work.

On your recommendation in an earlier post, I recently picked up two books by Shirreffs. This tenderfoot thanks you for pointing the way to good Westerns.

Seems like there must have been a test for meanness for cattle owners, if they passed they could become Cattle Barons.

Makes sense to me.

The magnum opus of G.D. Shirreffs is his four voulumes saga of The Kershaw Family, from the time of the Mountain Men (Quint Kershaw) till the end of the Frontier during the Apache Wars (Alec Kershaw). He run a serial character by the name of Lee Kershaw with few novels and you must try The Apache Hunter (probably the best one).
Good Cavalry vs Indians stories are The Valiant Bugles, Fort Vengeance, Last Man Alive and Bugles in the Prairie.
Then if you're lookin' for compelling treasure hunters stories you must try Barranca!.
Tiziano Agnelli

Thanks for the recommendations. I have several of those novels you mention. In fact, BARRANCA is sitting about two feet from my computer right now.