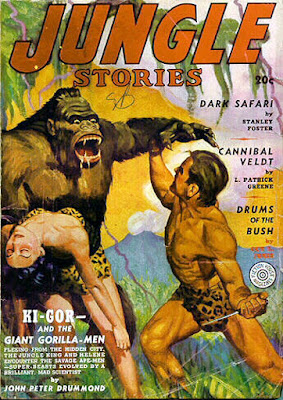 Okay, I'll admit that the author of this third entry in the Ki-Gor series had me at "Giant Gorilla-Men". From the Fall 1939 issue of JUNGLE STORIES, this yarn finds Ki-Gor and the beautiful redheaded aviatrix Helene Vaughn making their way across Africa toward the east coast, where Helene hopes to find an outpost of civilization so she can return to America and Ki-Gor can be restored to his rightful family in England. Of course, Ki-Gor isn't sure if he really wants to go. I mean, he is the Lord of the Jungle, after all. He's really just going along to humor Helene, who he rescued after her plane crashed.

Their journey is interrupted by a clash with some gorillas who are far from their usual hunting grounds and who seem more man-like than regular gorillas. One of them carries off Helene, and Ki-Gor sets out to rescue her yet again. Then he encounters a native tribe led by a former American sailor from Chicago named George Spelvin. I don't think this is the same character who's later known as Tembu George, but he's an excellent sidekick for Ki-Gor and not as stereotypical as you might expect. The gorillas have been plaguing George's tribe, too, so he and Ki-Gor team up and invade a lost valley known as the Land of the Living Dead, where the gorillas have been coming from.

Yep, it's another lost civilization of sorts, with an evil ruler, some pseudo-science, and plenty of danger for Ki-Gor, Helene, and George. It's all pretty silly, but I was raised on this sort of stuff and still love it. I don't know who wrote this one. It's similar but a little different from the second novel in the series, just as that one was similar but a little different from the first. I really don't feel like this is the work of John Murray Reynolds, who wrote the first novel, but at this late date it's hard to say for sure. Helene is less competent in this one and doesn't have much to do. George is a great character, though, and I hope he hangs around for a while in the series. The gorilla men turn out to be a little disappointing, but overall this is still a pretty entertaining yarn for an old pulp fan like me. If you fit that description, you might enjoy it, too.

I have a set of JUNGLE STORIES and it is fun to read. My favorite writer by far is Dan Cushman who wrote not only the Armless O'Neill series but others starring men similar to Armless.

According to Peter Corrane's Ki-Gor Bibliography, "The story KI-GOR AND THE GIANT GORILLA MAN (Fall 1939) and NIRVANA OF THE SEVEN VOODOOS (Spring 1949) are identical in content."

That strikes me as odd, Jerry, since this one has some definite continuity with the first two novels in the series, but anything is possible in pulp publishing.

Jungle Stories did a lot of reprinting later in its run. Sometimes they'd change out the title, sometimes they wouldn't. At least once they reprinted with a different old title rather than the same old title -- although I kind of wonder if that was an accident.

George indeed recurs, and grows into one of my favorite characters. If you like these early ones, you're going to love some of the later ones when it really picks up steam. My first top picks are in volume 3 of this reprint series.

I gassed on about my love for Ki-Gor over at my own site, here: http://www.howardandrewjones.com/heroic-fiction/pulp/the-mighty-ki-gor-tarzans-forgotten-rival

Well, to my taste PLANET STORIES sharply improved when Jerome Bixby was editing it at the turn of the '50s...was the same true of JUNGLE STORIES?

George Spelvin?! Did Drummond work in theater? "George Spelvin" is the fake name usually reserved for surprise roles in a play or extras who never appear on stage. Also it's been used by people who are embarrassed by the work and don't want their real name associated with the production. I've sometimes seen it in movies, but it's more often associated with stage productions and legitimate theater.

So many pulp reprints, so little time...

As Keith says we live in the Golden Age of Pulp Reprints. Altus Press has over 200 books out so far with an ambitious future schedule of reprints coming soon. In addition we have such reprint lines as Adventure House, Girasol Press, Black Dog Books, Murania Press, and others putting out reprints.

Next big reprint coming out: THE SNARL OF THE BEAST by Carroll John Daly from Altus Press. The Race Williams stories from BLACK MASK! The big book looks like a big black tombstone. Which is suitable for a Race Williams collection!