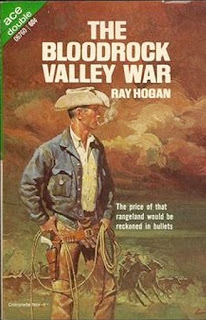 Ray Hogan wrote for most of the paperback publishers at one time or another, but early in his career his main market was Ace Books, which published many of his novels in the Ace Doubles line, including THE BLOODROCK VALLEY WAR. The hero of this one is Ben Keenlyn, the owner of a small ranch in Bloodrock Valley, New Mexico Territory. When an Eastern syndicate wants to buy all the ranches in the valley and consolidate them, Keenlyn is the lone hold-out who refuses to sell. This puts him in bitter opposition to the other ranchers, who want to take the money and run. The most powerful of them, Pete Amber, decides to force Keenlyn out of Bloodrock Valley, no matter what it takes.

That's pretty much the whole plot. The set-up and the resulting range war fill up this short novel, which probably isn't much over 35,000 words. There's very little characterization. The book is almost all action and tough, clipped dialogue. Even the few female characters are laconic, biting off their sentences like talking hurts their mouths. But for what it is, I found the book very enjoyable. It reads fast, and a couple of minor but well-handled twists insure that not everything is quite as black and white as it seems at first. Hogan was a very traditional Western writer, but he always delivered a satisfying story.
Posted by James Reasoner at 6:00 AM

I have a couple of Hogan doubles and at least one ?later singleton...I need to dip in.

Was that late double the first edition?

First and only edition as far as I know, Todd.

I've found a large-print hardcover, with an amateurish cover that I've posted in the round-up list post...you'd have to scroll down to see it. LP doesn't pay much, I imagine, but it has to be, or have been, the largest secondary market for western books, I imagine...certainly I've picked a fair amount of reprints on line and in discard sales thus.

Todd,
I hadn't seen that large print edition. It doesn't have a very attractive cover, does it? The library market for large print, while nowhere near what it once was, is still pretty good. Decent gravy money, anyway.