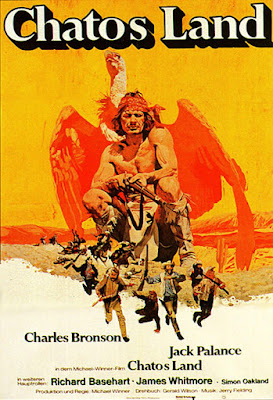 This is one of the few Charles Bronson movies I'd never seen. CHATO'S LAND is about as simply plotted a film as you'll ever find. Bronson plays a half-breed Apache who guns down a lawman who's about to kill him for no good reason. A posse of townspeople led by former Confederate officer Jack Palance chases him into the Arizona badlands. The posse members start fighting among themselves after they find Bronson's homestead, rape his wife, and kill his brother. Then the hunters become the hunted as Chato starts picking them off one by one, and the only question is who's going to survive. That's it.

With a plot like that, the appeal of the movie is going to depend on how well it's done. In that respect, CHATO'S LAND is a mixed bag for me. Bronson gives a good performance as the tight-lipped, vengeance-seeking protagonist. And I do mean tight-lipped. He has maybe a dozen words of dialogue in English and not much more than that in Apache, but he manages to be a formidable screen presence, anyway. At times I felt like this was more Jack Palance's movie than Bronson's. He's excellent as the former soldier who misses the war and sees this pursuit as a chance to recapture some of the excitement of those days. The rest of the posse is filled out by some fairly big names, such as James Whitmore, Simon Oakland, Richard Basehart, Richard Jordan, and Ralph Waite, but for the most part they come across as mostly interested in a paycheck and a trip to Europe, where the movie was filmed. The production values seemed more like TV rather than feature film level, but on the other hand, I was watching a mediocre print recorded from TV, so it's hard to say about that.

Overall, I'd say CHATO'S LAND isn't anywhere near the top rank of Bronson's Westerns. It's worth watching for his performance and Palance's, but it's so overwhelmingly bleak it would be hard for me to call it entertaining. I'm still glad I watched it. One more off the list.
Posted by James Reasoner at 5:30 AM

I've seen this movie a couple times, most recently in October 2016. I liked it and in fact I tend to enjoy the bleaker and more downbeat westerns. I've seen so many westerns with happy endings and nice good guys, that I'm sick of them. Another thing about this movie I like a lot, except for the poor indian girl who is raped, there is no silly love interest in the bleak desert. The real west was not full of young pretty girls wandering around ruining the movie. I know I'm in a minority about this!

Saw this one in the theater in Brownwood, Texas, many long years ago. Haven't seen it since, but I remember that I liked it at the time.

Bill, just in case you don't have it on your cable channels, Starz, Encore, has two channels that they run 24 hours each day, called THE WESTERN CHANNEL. I saw CHATO'S LAND last month on it and maybe that's where James saw it also. If you love the old western movies, then you have to get a cable provider that has THE WESTERN CHANNEL.

They do show some of the old western B-movies like Gene Autry and some others, but most of the films are from the fifties, sixties, and seventies. Also some new films. So it's just not all kid stuff with silly sidekicks. For instance tonight they are showing one of the great ones: VALDEZ IS COMING. Talk about being hard boiled!

Completely agree with you, point by point, on this one, James. Daddy Walton sure could play a sleazy SOB when he wasn't on the Waltons, couldn't he?!

"Chato's Land" was one of the violent westerns that I dragged my fiancee to see in the theaters in summer 1972. Others were "Red Sun," "Joe Kidd," and "Duck You Sucker" aka "Fistful of Dynamite." She married me anyway. I believe "Chato's Land" was Bronson's first movie with Michael Winner.

I am with Walker all the way. Bleak, hard boiled and realistic beats happy ending, white hats vs. black hats matinee idols fighting over the pretty girl every time. Chato's land did it for me.