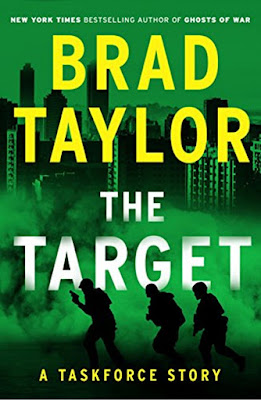 I'm glad that authors of some popular series have started writing stand-alone e-book novellas set in those series. I'm usually not in the mood to tackle some 400 page thriller, but I'm certainly willing to try a 20,000 word novella with the same characters.

I have some of Brad Taylor's novels about the Taskforce, an anti-terrorist group led by Pike Logan (a manly name if I've ever heard one), but I've never read any of them. I picked up a novella by him called THE TARGET, which serves as a prequel to the Taskforce series and provides some back-story on a trio of supporting characters. They're Mossad agents, two men and one woman, all of them with considerable emotional and professional baggage. Thankfully, that doesn't get in the way of the story, which moves right along at a nice clip. They're sent to Argentina to assassinate a former Nazi who was a guard and executioner at Auschwitz (this story is set in 1998), but in the process of setting that up they uncover a dangerous plot that requires them to go rogue and abandon their original mission.

There's a touch of the paranormal in this one that you usually don't find in these contemporary thrillers, but I thought it worked really well. I liked the characters, too, and unlike the bloated and overwritten doorstops you often find in this genre, Taylor's prose is pretty lean. The book could have used another copyediting pass to take care of some typos and a few sentences that don't quite make sense, but the formatting is very good, something that all too often you don't find in e-books coming from the big publishers in New York.

I don't know if I'll ever get around to reading any of Taylor's full-length novels, but there are several more of these Taskforce novellas and I plan to read them, since I definitely enjoyed THE TARGET. Good action scenes, good characters, and short enough that my ever-dwindling attention span didn't kick in . . . These days, that's plenty for me.