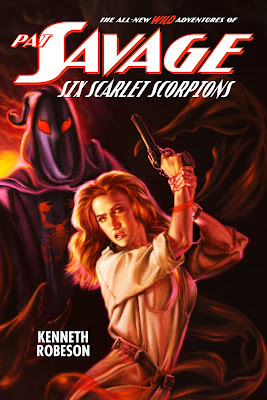 As I've mentioned before, nothing makes me feel more like I'm back in junior high or high school than reading one of Will Murray's new Doc Savage novels. They perfectly recreate the experience of whipping through one of those Bantam paperbacks, right down to the way publisher and designer Matt Moring of Altus Press makes the pages look. SIX SCARLET SCORPIONS is not a Doc Savage novel, but it features Doc's beautiful cousin Pat Savage, along with able assistance from Monk Mayfair and cameo appearances by Monk's long-time friend and adversary Ham Brooks and Monk's pet pig Habeas Corpus. I've liked Pat ever since her introduction in the novel BRAND OF THE WEREWOLF, so it's no surprise that I found this to be an excellent book.

As it opens, Pat and Monk are in Oklahoma, looking to make some quick money by trading in oil leases. As you might expect, they run into trouble right away and then get even deeper into a mess involving a young man almost completely drained of blood who's barely alive, a mysterious Indian tribe that shouldn't exist, a sinister murder method that makes a red mark in the shape of a scorpion appear on its victims' faces, a newspaper publisher who may or may not be mixed up with a criminal gang, the publisher's beautiful blond fiancee, and a robed and hooded mastermind who calls himself Chief Standing Scorpion, war chief of the Vinegarroon tribe. All this leads to a series of deadly traps and hair's-breadth escapes (as they used to say on the back covers of the Bantam paperbacks), including a great scene on some abandoned oil derricks in the Arkansas River and a thrilling climax in a castle carved into a cliff in the Ozark Mountains.

For a long-time fan of the Doc Savage series (I read my first one, METEOR MENACE, more than 50 years ago), this is a wonderful throwback to a better time. Murray captures Lester Dent's style perfectly in both the prose and the plotting. I raced through this novel and had a great time doing so. Murray's a busy writer, but I hope he's able to give us more fine yarns starring Pat Savage. In the meantime, SIX SCARLET SCORPIONS gets a very high recommendation from me.

You had me until I saw the price. That's a bit more than I want to pay for a paperback at the moment. I'll put it on my list, though and wait for a sale.

"throwback to a better time." I agree, the pulp era was a better time. The general publishing climate today seems too focused on message and not enough on story. Rough Edges being a notable exception, of course.

There'll probably be an e-book edition in the near future, and like you say, Altus Press does have frequent sales. The first Doc Savage paperbacks I bought off the spinner racks were 45 cents. Those were the days, as they say.

I don't agree that the pulp era was a better time. Too much bad writing and bad dialogue. Some good stuff out of Black Mask and Weird Tales but otherwise forget it. Tried reading some Doc Savage when they were reprinted by Bantam. Just couldn't get through one.

We'll have to agree to disagree, Steve. Thirty years ago, people were saying that everything worth reprinting from the pulps had already been reprinted. I feel like with all the reprints in recent years from Altus Press, Black Dog Books, and other small press publishers, we're just now starting to do more than scratch the surface of the worthwhile fiction from the pulps.