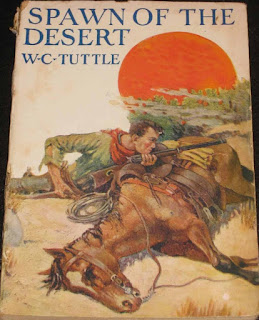 W.C. Tuttle's novel SPAWN OF THE DESERT was published in the May 10, 1922 issue of SHORT STORIES, then reprinted by Doubleday, Page the next year in that oddball series of digest-sized paperbacks comprised of material from SHORT STORIES, complete with the usual "Red Sun" covers. It's a stand-alone novel, instead of an entry in one of Tuttle's many series, and opens with a pair of mysterious travelers arriving in the rough-and-tumble mining town of Calico, on the edge of the Ruby Hills.

Calico is ruled by a brute of a man known as Silver Sleed, and it doesn't take long for the newcomers to clash with him. The pair are Duke Steele, who gives every appearance of being a gunman, and a white-bearded old timer who claims his name is Le Saint. The Saint, as he comes to be known, is part preacher, part gambler, part killer, and a man haunted by secrets. When Steele and The Saint meet Silver Sleed's beautiful daughter Luck, it's inevitable that those secrets will begin to come out and result in gunplay and tragedy. 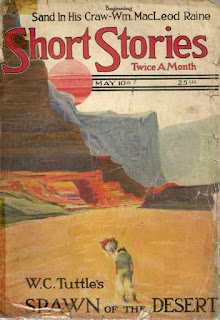 I love W.C. Tuttle's work for its irresistible blend of mystery, comedy, and Western action, but SPAWN OF THE DESERT is a very different book for him. There are a few small touches of humor, but mostly this is a grim yarn full of psychological drama, much more reminiscent of Max Brand than of Tuttle's usual output. However, it's written with Tuttle's usual talent and he really makes the characters and setting come to life. The long, compelling scene that forms the climax is as suspenseful as anything I've read in a good while.

You're not likely to run across either of the original editions of this book, but there's a very badly scanned e-book version available on Amazon. That's how I read it. The poor production values are annoying at first, but the story is so gripping that I soon forgot about those problems. If you've never read Tuttle before, this probably wouldn't be a good place to start, but if you're already a fan and want to see him trying something different, I highly recommend SPAWN OF THE DESERT.

UPDATE: And thanks to August West, we now know there was a movie version as well! Judging by the IMDB entry, it appears to have been a fairly faithful adaptation, too. 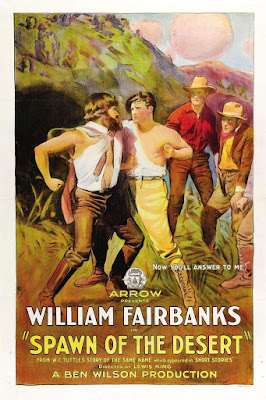 I picked up a box of these old Doubleday digests for a buck at a garage sale. And "Spawn of the Desert" was among them. I never read one but now I just might. Thanks for the review.

I think I read some Tuttle short story (stories?) somewhere in a multiple author collection, but can't name either story or collection.

I'm a big fan of Tuttle, too! I just read SHERLOCK OF THE SAGE. Great Fun!

You make it sound interesting. I just might have to try a sample.

It's available as a free download in a variety of formats at Internet Archive.

There are also at least two Tuttle novels available from the open library website and several short stories at unz.org