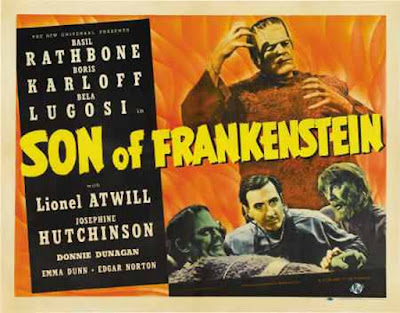 I recently watched SON OF FRANKENSTEIN, the third and final film to feature Boris Karloff as the Monster, for the first time in years, and I was pleased to discover that it holds up really well. Although it's generally regarded as the least of the opening trilogy in the series, it's actually my favorite of the Frankenstein movies for several reasons, most of them involving the cast.

Karloff is bigger and bulkier than ever as the Monster, and he's great as usual. But Basil Rathbone gives a fine performance as Wolf von Frankenstein, Victor's son, who winds up reviving the Monster even though he knows he shouldn't. My favorite actor here, though, is Bela Lugosi, who is almost unrecognizable as Igor and turns in one of his least hammy performances. He summons up some serious creepiness in this movie, especially when he peers through windows or hidden openings in the walls, as he often does.

The script is good, too, with some nice touches of humor. At one point Rathbone, as Wolf von Frankenstein, complains that people think the Monster's name is Frankenstein. (I did when I was a kid, and you probably did, too.) I always enjoy seeing those stark Castle Frankenstein sets, and the photography is nice throughout. Rowland V. Lee, the director, wasn't as much of a stylist as James Whale, who helmed the first two films, but he keeps things moving along briskly and the action-packed ending is both exciting and poignant. Overall, I find SON OF FRANKENSTEIN to be a huge amount of fun.

Those Universal horror movies scared the hell out of me when I was a kid, but at the same time I loved them. Every time I watch one of them these days, I still get a big kick out of it. That's the mark of a good movie. (Although I have to admit, while I was watching this one a part of me kept waiting for Frau Blucher to show up. And when the characters first arrived at the castle, I couldn't help but think, "What knockers!"...)

That might've been okay, but it certainly would have been a different sort of movie with Lorre in the role.

Been a favorite of mine for years.

I've seen this one fewer times than any of the others. Another one that I really like is FRANKENSTEIN VS. THE WOLF MAN. I think that's the 5th Frankenstein movie and a sequel to THE WOLF MAN.

I'm thinking I need to watch more of those Universal horror movies. (Or as we called them when I was a kid "monster movies".) There are a few I've never seen, as far as I recall, and others I haven't watched in many years.

They scared me until I reached my teens. I haven't seen this in such a long time I forget everything about it, but I'd love to see it again.

Striking visuals, and Lionel Atwill is quite good here,but the story stalls out a bit in the middle.

After this film, someone at Universal decided Bela Lugosi wasn't going to get a decent part there again. His reprise of Ygor in GHOST OF FRANKENSTEIN , and the Monster in MEETS THE WOLFMAN are arguable exceptions, but it was pretty much all butlers from then on out.

I finally watched The Monster Squad (1987), which is streaming on Netflix. It’s about a group of middle school kids, steeped in fandom for the Universal monsters, who contend with the real thing when Dracula, Wolfman, the Mummy, the Creature and Frankenstein’s monster all show up in their small town. While not as good as I hoped it would be, it’s a fun film and Stan Winston’s recreation of the classic monsters is wonderful.

The thing that got me is that the movie was probably made for the last generation who grew up with these old “monster movies”. The kids who grew up watching TV when these old films were shown regularly, for Saturday afternoon Creature Features, Friday night Chiller Theaters, and in rotation every Halloween. In the days before cable, the VCR, and a new wave of horror films had totally changed the landscape. In an odd way, The Monster Squad is even more dated that the Universal films to which it pays tribute. If you’re a monster kid and haven’t seen it, you might find it speaks to you.

I saw THE MONSTER SQUAD when it was new and recall enjoying it quite a bit, but I haven't seen it since then. I was definitely one of those monster kids, although I was a bigger fan of Republic Westerns and Tarzan movies, which were also on TV all the time in that era.

When I was a monster kid I liked the Universal monsters well enough, but much preferred the 1950's atom age monster flicks.
I might have gone outside to play rather than watch Bela Lugosi as Dracula again, but I would never have left my seat for re-runs of Them, The Black Scorpion, Earth Vs. The Flying Saucers or (my all time favorite) Fiend Without a Face.

I liked those Fifties movies, too, was particularly fond of KRONOS and INVADERS FROM MARS. I don't think I've ever seen FIEND WITHOUT A FACE. Love the title, though, and will check it out.

Gadzooks! There are so many glorious aspects to Fiend Without a Face that I despair of even beginning to describe them to you here.
How about: This is a 1958 Cold War science fiction horror movie featuring invisible brain-sucking monsters who materialize at the climax as stop-motion animated brains with antennas and attached spinal cords. And the wonderfully restored DVD is part of the freakin' Criterion Collection.
Once seen, this one is never forgotten.