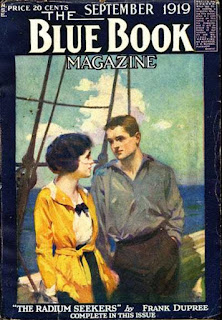 THE HORN HUNTERS is a novella that originally appeared in the September 1919 issue of BLUE BOOK. Set in the jungles of Southeast Asia, it's about an American big-game hunter known as Say-and-See Smith, who is after some legendary and highly valuable golden rhinoceros horns (real horns that have a golden color, not horns made out of gold). He teams up with a two-fisted scientist, makes an enemy of a Chinese opium smuggler, rescues a beautiful girl from a deadly torture trap involving a cobra, finds a lost city, and generally swashbuckles his way through this very pulpish tale.

I've written many times about my fondness for the work of H. Bedford-Jones, so it's no surprise that I enjoyed THE HORN HUNTERS. An ending that probably could have been a little more dramatic keeps this one from being in the top-rank of his stories, but it's still thoroughly enjoyable. As always, Bedford-Jones's prose is lean, fast-paced, and very effective, and Say-and-See Smith is a cool-headed, hardboiled protagonist. There are some nice scenes of spectacle that would have worked well in a big, A-list 1930s movie with hundreds of extras and, say, Randolph Scott as Smith.

THE HORN HUNTERS is available as an e-book from Wildside Press. The story shows its age a little (it is 96 years old, after all), but I found it quite enjoyable, and if you're a fan of pulp adventure in general and H. Bedford-Jones' work in particular, it's well worth reading.

This story sounded so good that I pulled out my copy of the September 1919 BLUEBOOK. Turns out I read the story in October 1986 and enjoyed it. My note says "Say and See Smith and his buddy Bryce; sounds like a series but I don't believe it was. Hunting for Rhino horns in Indo China."

What a great magazine BLUEBOOK was during the teens, twenties, thirties, and forties. Mike Ashley has a long 40 page history of the magazine in PULP VAULT 14 which is available on amazon.com or from BLACK DOG BOOKS.

Read this last month and it still holds up. HBJ stories always delight. Of the 300+ I've read, only two were duds, and that's probably the fault of the reader not paying attention. I only have about 2000 more to go.

Honestly, I'm a bit left out here. I've only read a couple stories by H. Bedford Jones and was, while not put off, not fired up to seek out more either.

Can I ask for some recommendations that show the author at his best?

Bedford-Jones did his best work for BLUEBOOK but if you are not a pulp collector, then go to the Altus Press website. They have recently reprinted about a dozen collections of his stories and novels. Pick out one that sounds interesting and go from there.

John,
THE MASTER OF DRAGONS and THE GOLDEN GOSHAWK are both excellent H-BJ collections published by Black Dog Books. I love both of his novels about the Texas Revolution, BOWIE KNIFE and TEXAS SHALL BE FREE, both available from Altus Press.

I'll look for that issue of Blue Book.

The Seal of John Solomon is my favorite H. Bedford Jones piece of bunch that I've read, though I'm not yet an HBJ expert. It was reprinted in High Adventure, originally in Argosy and easily found on Amazon. This is an adventure tale of my favorite sub-genre: The lost race adventure. In this regard, it's way up there with H. Rider Haggard's King Solomon's Mines and Perley Poore Sheehan's gorgeous jewel, Abyss of Wonders, which Ed Hulse/Murania Press is about to reprint.