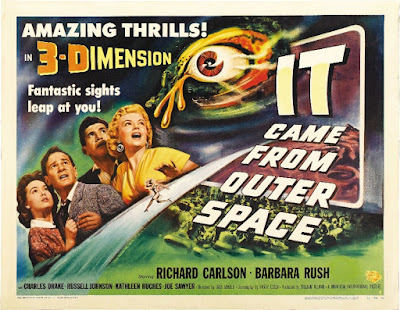 I'm not a big fan of the TV horror movie host Svengoolie (on the MeTV Network every Saturday night, 10 eastern, 9 central—do I get paid for that plug?), but he shows a lot of movies I've either never seen before or haven't seen in many years. IT CAME FROM OUTER SPACE falls into the former category, although I don't know how I missed it, since it was on TV all the time when I was a kid. (That's becoming a recurring theme on here, I know.)

But when I started watching this one, I felt like I'd seen it before, because it's been copied and parodied so many times. A writer and amateur astronomer (Richard Carlson) lives in a small Arizona town and is out one night with his girlfriend, a local schoolteacher played by the beautiful Barbara Rush, when they see what they think at first is a meteor. But when Carlson examines it more closely, he realizes it's a spaceship. However, a rockslide covers it up before he can prove that to anybody. Then weird things start to happen, accompanied by theremin music, of course, and only gradually do the local citizens start to realize that Carlson was right all along and aliens are creating duplicates of townspeople they've captured.

As predictable as it seems now, it probably wasn't so much so in 1953. And familiar or not, the movie is well-made, very effective, and really downright creepy in places. Ray Bradbury came up with the story and according to most accounts wrote nearly all the dialogue, too, although he doesn't get a screenplay credit. Despite the occasional lurid moments, IT CAME FROM OUTER SPACE is rather low-key and intelligent for the most part, with a fine cast that also includes Charles Drake (Dr. Sanderson from HARVEY, one of my favorite films) and Russell Johnson, the Professor from GILLIGAN'S ISLAND, in a duel role as a telephone lineman and an alien impersonating him.

I really enjoyed this one and probably appreciated it more now than I would have as a kid. You can expect more of these monster movie posts in the future, since I have a lot of those films to catch up on and others to revisit.
Posted by James Reasoner at 6:00 AM

My aunt drove me to Dallas to see this one in 3-D for my birthday when I turned 12. I thought it was great.

Around this time I started to go to the movie theaters by myself at night and this one scared me a lot. But not as much as the pedophiles who used to cruise the movies trying to pick up innocent kids. It was a more naïve time in 1953 and at age 11 I was lucky to avoid trouble. Sort of made the monsters in the SF movies look like good guys.

The scene of Barbara Rush, wearing a black dress, standing on a boulder in the desert with the wind in her hair, looks so much like a Virgil Finlay illustration that I almost fell out of my chair.

This movie, along with THE THING and THE DAY THE EARTH STOOD STILL are my favorite 1950s SF films. And I agree with you re: Svengoolie. I always check to see what he's showing. The Saturday lineup on MeTV is excellent: westerns all day, SF/superheroes all night.

John,
I thought the same thing about that shot of Rush. I don't know if the filmmakers were familiar with Finlay's work or if it was just a coincidence, but it sure is a beautiful shot.

I saw it when I was 8 or 9, and remember it being scary then. I saw it many years later as a "creature feature", perhaps hosted by Elvira, and thought it camp, but that was the way we saw things then. I'm not familiar with MeTV, I'll have to see if it's part of the station lineup we get.

My brother and I saw this in 3-D when it came out and were knocked out by it. It holds up very well. Rush is so damned beautiful. It's not at the level of The Invasion of The Body Snatchers but its my second favorite sf of the 50s. There was a melancholy underpinning to the screenplay, the direction and especially the acting that made it seem more adult than the usual sf fare.

Bradbury's book IT CAME FROM OUTER SPACE includes several of the treatments he had done for the movie. If they had stuck with Bradbury it would have been a much better film. But then, much better films are not what Hollywood is about.

I find Svengoolie less engaging than I'd hoped after hearing a fair amount about him before MeTV networked him, but the New York based trio hosting films in the same time slot on Antenna TV are even less likely to amuse me, and they seem to get much worse (presumably public domain) copies of the films they show.

But his show does run some rather good films, and I know I've seen at least some of this one, and will probably catch it in entirety eventually.

Rick, in Portland you can see MeTV, a broadcast network available in most of the US, as the secondary affiliation of KTVU Cnannel 2 on its second digital channel, thus:
"You can find MeTV over the air on Channel 2.2; on Comcast cable, it's Channel 302; on Verizon, it's Channel 464; and on Frontier TV, it's Channel 463."

My level of annoyance with Svengoolie seems to fluctuate depending on how long the movie is that he's showing. Long movie, less Svengoolie and I find him tolerable and sometimes funny. But when the movie is short and he needs a lot of filler to use up the two-hour time slot, then the stuff gets old pretty quickly. I'll give him credit, though, he really seems to enjoy what he's doing and I always appreciate a throwback to an earlier era, and that's what this show is. Plus he knows his stuff and comes up with some interesting background info on the films.

I kind of like Svengoolie. His show is the kind of cheesy filler that was part of kid’s TV when I was growing up. It takes me back. Also, I agree with comments about the lovely Ms. Rush, who was a terrific actress and got the chance to show it in later dramas like BIGGER THAN LIFE, THE YOUNG PHILADELPHIANS, and STRANGERS WHEN WE MEET.

I watch Svengoolie's show not because of him, but in spite of him...there're some classic films that I've either never seen or haven't for a long while. An example of the latter was last week with IT CAME FROM OUTER SPACE, and I thought it was just an absolute treat.

My wife & I saw ICFOS in 3D in 1974 at the Avenue Theater in San Francisco. That was supposed to be the first set of 3D prints since the initial release. The 3D was well planned and executed. In the landslide scene my wife really jumped when a boulder seemed to be landing in her lap.

As for Sevengollie… I've seen his show on MeTV a couple of times here in Kansas City. He does know his stuff, but I find his humor, shall we say, lacking. But, I've been where he is.

In 1991 the short lived WBE (Worlds of Better Entertainment) network came to life. I hosted Action Theater as Major A.D. Venture. Action Theater had a two hour time slot. More than once the film had a run time of around 60 minutes. I had to fill as much as 25 minutes by myself. The PTB would not allow cartoons, or other filler material. I just blathered along as best I could.

Erwin,
I would have liked to see some of those Action Theater episodes. I don't remember the WBE Network at all. It must not have had an affiliate in the North Texas market.