Tuesday's Overlooked Movies: The Cat and the Canary 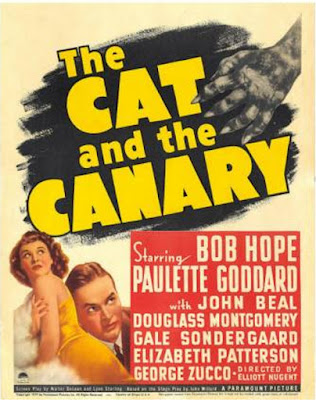 This is another movie I never saw until now, despite being a Bob Hope fan for about as far back as I can remember. I grew up watching the Road pictures on TV, and while Hope and Bing Crosby weren't my favorite comedy team from that era (I liked them better than Martin and Lewis, but not as much as Abbott and Costello), I thought the movies were really good. The drive-in just up the road from us always showed Hope's movies during the Sixties, and I saw most of his TV specials (especially the ones about the USO trips) and of course every year he hosted the Oscars.

But THE CAT AND THE CANARY, which was his first real starring role in a movie, I missed that one. It's a mystery/horror/comedy, a variation on the old plot that has a bunch of heirs showing up at a spooky old house for the reading of a will that each of them hopes will make them rich. Naturally, one of the characters disappears and then turns up dead. The lights always go out just at inopportune moments. There are secret passages in the walls, bookshelves that open, eyes cut out in a portrait so the villains can spy through them, a killer in a rubber mask, and every other cliché you can think of from this type of movie.

And of course none of that matters because it's still pretty entertaining. The script isn't as funny as it should have been, in my opinion, but Hope's cowardly, wise-cracking screen persona is always good for a few laughs, although he seems a little subdued here, as if he hasn't quite nailed down the character yet. Paulette Goddard is lovely, and the cast also includes Gale Sondergaard, looking as sultry and sinister as ever, and George Zucco as a lawyer named Crosby. (There are no jokes about the name. I'm convinced there would have been if this movie had been made later.) The movie is set in the Louisiana swamps, and when we first see the old mansion sitting among moss-dripping trees, it's a genuinely creepy moment. I immediately thought of Robert E. Howard's "Pigeons From Hell".

THE CAT AND THE CANARY has just enough misfires that I don't think it's a great film, but it is a good one and is worth watching, especially if you're a fan of Bob Hope. Just don't expect the inspired lunacy of the Road pictures.
Posted by James Reasoner at 6:00 AM

I think I've seen this sometime in the distant past but this review has made me want to revisit. I love Hope

I just saw this one myself...it was on Svengoolie a couple weeks ago. First time for me as well, and as a Hope (and, yes, the Road movies) fan myself, it was a real treat.

p.s.: Martin & Lewis > Abbott and Costello. I was a fan of the latter duo when I was much younger, but recent viewings of their films show that -- for me -- they have not stood the test of time (or my aging). Martin and Lewis are still great, though.

I guess you can't go wrong with this story; there was an excellent silent version and a very worthwhile color remake in the 1970s, directed by soft-porn auteur Radley Metzger.

I'm a big fan of this film along with THE GHOST BREAKERS.