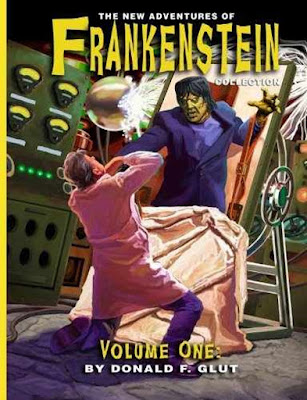 I've been posting about monster movies this month, partly because October means Halloween and partly because it just worked out that way. But I usually try to read a horror novel for the Forgotten Books post closest to Halloween, so this year we've got one inspired by a classic. It's FRANKENSTEIN LIVES AGAIN!, the first book in a twelve-book series by Donald F. Glut that are sequels to Mary Shelley's original novel, although the movies seem to have influenced the series as well.

In FRANKENSTEIN LIVES AGAIN!, the protagonist is Dr. Burt Winslow, a wealthy young American scientist who's obsessed with Shelley's novel and the theory that it was based on actual events. Using the money he's inherited, Winslow sets out to discover the truth. At the end of Shelley's novel, the Monster created by Victor Frankenstein disappears into the frozen north, supposedly planning to commit suicide. When Winslow finds out that a remote tribe of Eskimos are rumored to be worshipping a giant figure frozen in a block of ice, an Ice God, so to speak, he believes that might be Frankenstein's immortal creation, so he heads into the Arctic on a dangerous expedition.

Well, it shouldn't be any huge spoiler to reveal that the so-called Ice God really is the Frankenstein Monster, and of course Winslow is going to take it back to the German village of Ingolstadt, where he's already bought the legendary Castle Frankenstein and installed his beautiful blond lab assistant/lover to get things ready. And if they didn't thaw out the Monster and bring it back to life to create all sorts of havoc, we wouldn't have a book, would we? Before things are over, a crazed professor with psychic powers and his brutish assistant also figure into the plot, which features torch-wielding villagers, thunderstorms, and a considerable amount of carnage.

This book is an odd mix: part comic book, part men's adventure novel, part classic horror. What makes it work is that Glut plays things absolutely straight and spins his yarn with such enthusiasm that the reader can't help but be carried along with it. I enjoyed the first half of the book, where Winslow is searching in the Arctic for the Monster and battling Eskimos, more than the second half set in Germany, simply because it's an unusual setting for a story like this, but the whole thing is entertaining and worth reading if you're a semi-grown-up monster kid like me.

Glut wrote the twelve novels in this series in the late Sixties and early Seventies, before any of them were published, and you can tell it from the lack of computers, cell phones, etc. I'm glad he didn't update them. That sense of the time period adds to the charm of this book. Over the years they were published haphazardly. I don't think there was ever a uniform edition until recently, when they were published in two large omnibus volumes that are still available. This is some pretty good Halloween reading, or any other time as well if you're a Frankenstein fan.

I read this book as I was going back to buy old Marvel horror comics from the 70s. It strikes a similar mood. Loved it.

Glut's work is almost definitive pro fan-fiction. Others have done well recently with that kind of thing.

*laughing at Todd's comment--no grey areas, either* Ya know I've not even read the first Fronkensteen novel, and it's probly high time I started. I do know the basic story, so this might just as well be the place to plunge in.

Glut's "remote tribe of Eskimos worship a human figure encased in a block of ice" trope may have been inspired by the classic Marvel comic AVENGERS #4, since that's the identical situation used to re-introduce Captain America into early 1960s comics continuity. Cap had only been frozen in ice for twenty years or so, though (since the last days of WWII), so even if the monster doesn't get points for originality here, he (it?) still has seniority bragging rights.

Denny,
I thought the same thing. I remember AVENGERS #4 quite well, since I bought it new off the spinner rack in Tompkins' Drugstore, in the first stack of Marvel Comics I bought for myself, not long after a couple of my cousins gave me a stack of them on Christmas Day 1963.