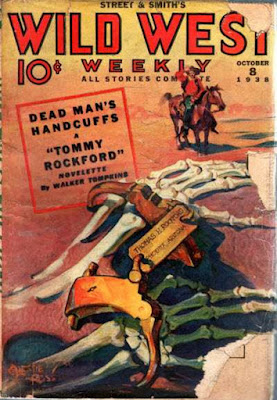 I wish it didn't have some hunks chewed out of it, but you can still tell that's a nice cover by A. Leslie Ross on this issue of WILD WEST WEEKLY. I'll bet the Tommy Rockford story by Walker Tompkins is pretty good, too, since all of them I've read have been. There are also stories by Lee Bond (twice, one under his own name and one under the house-name Andrew A. Griffin), Chuck Martin, J. Allan Dunn, and Allan R. Bosworth writing under the Dean McKinley house-name. Looks to me like a fine issue all around.
Posted by James Reasoner at 6:00 AM

These really are some great old covers

I picked up an issue of this not long ago and will read it soon, but does Mr. Reasoner or any other members of his campfire station have a specific issue of WWW that he or she thinks stands above the others?

That's a great cover, very unusual for a pulp. WWW and WESTERN STORY during the late 1930's started to have cover art that showed scenes from unusual angels. They also used some symbolic covers.

I used to collect WWW many years ago but every time I tried to read an issue I was defeated by the simple fact that the magazine was slanted toward the teenage boy market. I used to be friends with an old time collector who actually bought the magazines off the newsstands in the early 1930's. He once told me about how he started reading WWW as a teenager and then graduated to WESTERN STORY which was more adult.

I talked him into selling me his collection of WWW but I never could read them. However, I've heard that the magazine became more adult in the late 1930's and early 1940's(Street & Smith killed it in 1943 because of wartime paper restrictions). So maybe this issue is from the so called adult period. I'll have to read a few of the later issues and see if I still think the stories are written at a far lower level than WESTERN STORY.

Redd Boggs has written an essay called "Remembering WILD WEST WEEKLY". I believe it's in a book called THE PULP WESTERN. Also Laurie Powers has written books about the big WWW author, her grandfather, Paul Powers.

To me, by the late Thirties there's not much difference in the quality of WWW and WESTERN STORY, although WWW still has more series stories. But I like series, so that doesn't bother me. I read that great Redd Boggs essay in THE PULP WESTERN many years ago, when that book first came out, and it was the first time I read much about WILD WEST WEEKLY. Before that I wasn't really aware of it. As I've mentioned before, WWW was Elmer Kelton's favorite pulp when he was young, and Sonny Tabor his favorite character. I don't see much, if any, WWW influence in Kelton's work, though.

Thanks for the thoughtful replies. I'll check out the issue that I have and see how it goes--I too was concerned that it might be a bit juvenile in tone, but I can enjoy that sort of stuff if it's good (I'm a fan of G-8, for instance). But yes, Western Story is a reservoir of Max Brand's finest, and I've got those on the reading pile too...

(And on a related Western note, my movie Bone Tomahawk opened in select theaters and became available on VOD on October 23rd)