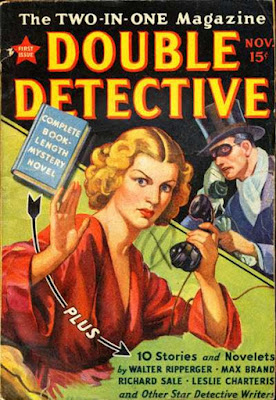 I'm often amazed at the table of contents in some of these pulps. Like this one: stories by Leslie Charteris (a Saint yarn), Max Brand, Cornell Woolrich, Richard Sale, Cleve F. Adams, Roger Torrey, Dale Clark, and Walter Ripperger. That's all. Just a normal issue in those days.
Posted by James Reasoner at 6:00 AM

DOUBLE DETECTIVE was a real puzzle. They used the best writers and it was an attractive magazine but it just didn't catch on. After a couple years they stopped using quality writers and it became a hero pulp with the character called The Green Lama. I've read the editors were really disappointed that the magazine failed.

I had forgotten that DOUBLE DETECTIVE was where the Green Lama appeared. I need to read some of those stories. I have the Altus Press collections. I've enjoyed the other stuff I read by Kendall Foster Crossen.