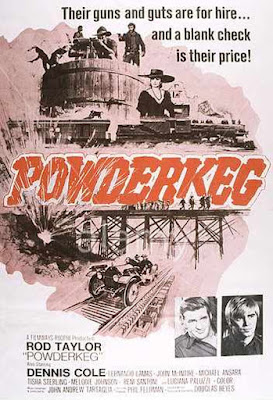 I recently watched this movie again for the first time in more than 40 years, and I'm happy to report that it holds up pretty well. I remember really liking it when I saw it back in 1971. It's one of those sort-of Westerns set in the early 20th Century. Fernando Lamas and Michael Ansara play brothers who start out as revolutionaries in Mexico but wind up as bandits, and when Ansara's character is captured and sentenced to hang, Lamas and his gang take over a whole train full of passengers and hold them hostage, demanding Ansara's release as they run the train back and forth on the same 40 mile stretch of track. They're over the border in Mexico, so U.S. troops can't go in and probably couldn't rescue the hostages without getting them all killed anyway.

So the railroad calls in troubleshooters Hank Brackett (Rod Taylor) and Johnny Reach (Dennis Cole) to do the impossible and save the train. Brackett and Reach are soldiers of fortune who travel around the Southwest in a Stutz Bearcat, having adventures, making wisecracks, and romancing beautiful women. Will they rescue the passengers and bring the bandits to justice? What do you think?

I tell you, when I watched this in 1971, I thought it was one of the coolest movies I'd ever seen. It's still pretty darned entertaining, if a little slow in spots. I don't know if writer/director Douglas Heyes ever read any of Ben Haas's Fargo novels, but this whole set-up would have worked perfectly for one of them. Rod Taylor even wears one of those Smokey the Bear hats like Fargo did on the covers of all those old paperbacks. POWDERKEG spawned a short-lived TV series called BEARCATS!, which I watched faithfully for all 13 episodes. The movie is available on DVD, as is the entire series. I may have to watch it pretty soon, because I really enjoyed revisiting POWDERKEG.
Posted by James Reasoner at 5:00 AM

I'd completely forgotten this and the TV series that it spawned. Thanks for the reminder. Douglas Heyes wrote some pretty good hardboiled crime novels, too. I reviewed a couple of them on my blog for the "forgotten books" meme.

I forgot about this one also. I saw it at sea in the 70s on the Navy ship that I was stationed on. I remember liking it. Checking Amazon Prime now.

Should've called the series Powderkeg also. Tho it was up against Flip Wilson and Alias Smith and Jones.

I don't think I've ever seen this one, but it looks great.

Speaking of sort-of westerns set in the same time period, wasn't there a James Garner western series on TV around this time? All I remember is him wearing a badge and driving an old car and there were oil wells and Stuart Margolin, a great, hilarious character actor on the same sleeze par as Strother Martin. I remember thinking it was hilarious. I loved Garner and Margolin together.

Nichols. Garner found his Maverikesque character out of tune with the spaghetti western '70's, and had himself killed off in the last episode of first season. Replaced by his more macho twin brother. Network wasn't buying literally.

Thanks for the review--I'll look into this one. And "Stranger on the Run" is also an enjoyable older tv western---directed by Don Siegel and staring Henry Fonda. I (sadly) had to buy a European import dvd of this tight little movie.

Hello. I saw the film in Spain when I was a child. I have a good memory of him. In Spain the title was Dos contra el mundo (Two Against the World).

I remember the show, but it was called Stutz Bearcat. For some reason it didn't resonate with me and I only saw a couple of episodes. Now, I'd like to see them all.

Ditto, James. Watched all 13 episodes and loved 'em! I remember the show simply being called BEARCATS.

The Garner thing was called NICHOLS, and I remember he rode into town on a motor bike. The show introduced Margot Kidder, who showed off her breasts in a peasant blouse every episode--but even that didn't help.