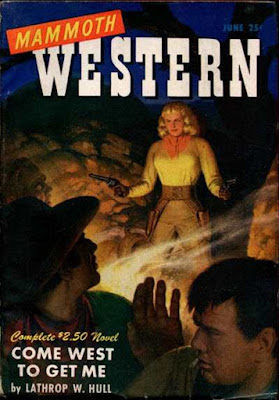 I think of Robert Gibson Jones as more of a cover artist for science fiction pulps, but he did Westerns, too, as evidenced by this issue of MAMMOTH WESTERN featuring a pistol-packin' blonde. Inside are many of the usual Ziff-Davis names: Robert Moore Williams, Frances Yerxa, Berkeley Livingstone, and H.B. Hickey, with some little-known writers mixed in.
Posted by James Reasoner at 6:00 AM

When reading the words "Mammoth Western," I always think of Chad Oliver's CANNIBAL OWL and Thomas Jefferson's instructions that Lewis and Clark look for giant proboscideans on their expedition. Can't have enough megafauna!

Awesome cover, looks like they did everything in house in Chicago, same writers and artists like you said as in Fantastic Adventures or Amazing Stories. Pretty cool really.

Steve,
That's true, all those names that were common in the Ziff-Davis pulps aren't on the tips of very many tongues these days, are they?

Chuck,
Come to think of it, one of Louis L'Amour's novels has a woolly mammoth in it. JUBAL SACKETT, I believe.

I really enjoy your blog.
If you had to pick a single favorite "lesser known/forgotten" pulp western author, who would you chose? And which stories would you recommend most highly?

Thanks, Craig. If I had to pick one author, I guess I'd say W.C. Tuttle, any of his novels about Hashknife Hartley. HIDDEN BLOOD and SHOTGUN GOLD are two excellent ones that come to mind. THE SHERLOCK OF SAGELAND is a collection of his Sheriff Henry stories currently in print from Altus Press. Some of his short stories are available as e-books, and used copies of many of his novels are available pretty inexpensively on-line. He's the best I've come across at blending comedy, mystery, and Western action.

I agree about W.C. Tuttle. The funny thing is that in the 1920's and 1930's he was very popular with many hardcover and appearances in the pulps but now is a forgotten writer. I blame the unjust prejudice against western fiction that we have nowadays.

Another choice I'd recommend is Luke Short. Almost all his work is available on the second hand book market and is inexpensive.

Thanks for the comments and suggestions! I know WC Tuttle, and enjoy him to some degree (his dialogue especially), though I tend to prefer heavier, darker, and less plot driven stuff. I'm a fan of Max Brand, Ray Nafziger and Ernest Haycox--especially Brand, who is my favorite western writer. And I dig Walt Coburn's characters and dialogue, though not his sloppy plotting in the handful of things that I've read by him.

Do any of the western pulpsters whom you've read stand out to you for doing particularly atmospheric and/or dark material? I would love to read something that felt like a Norvell W. Page Spider novel or Frederick C. Davis Operator #5 novel or a Bruno Fischer shudder story, but set in the west. I'm not sure if anything like this exists...

Craig,
You need to check out the books by H.A. DeRosso. He's about as dark a Western writer as I've come across, although some of his stuff does have more conventional endings. Lewis B. Patten is another in the same vein, but not as dark as DeRosso.

By the way, while I'm a long-time fan of Max Brand and am warming up to Ernest Haycox's work, I've read very little by Ray Nafziger, although I've seen his name on plenty of Western pulp covers. I'll have to check out some of his stories.

Thanks for the recommendation. I read .44 by DeRosso a lot of years ago, and will look further into his work---that one was pretty dark, though had a much stronger set up than follow through, and I didn't explore his work any further. If you have favorites by him, please recommend them...

My favorite Max Brands are 'Beyond the Outposts,' 'Singing Guns,' and a nasty, atmospheric, and grueling novelette I read in May 1934 Star Western called, "Lawman's Heart." A really good Nafziger tale is in that issue as well as a strong story called "Gallows Bait" by somebody named Wallace K. Norman that reads like a hero pulp.

Norvell Page wrote some Westerns, which have been collected in a volume called TRAIL OF THE SNAKE from Black Dog Books. I also remember reading a story in a Western pulp by Bruce Douglas where the hero was so crazed he reminded me of The Spider. That's the only thing I've read by him, and it was so long ago I couldn't tell you the title or issue.

I have BEYOND THE OUTPOSTS and SINGING GUNS but haven't read them. I may have that issue of STAR WESTERN. I'll check.

UNDER THE BURNING SUN is an excellent collection of DeRosso's short fiction. It's still available as an e-book, and used copies of the print editions should be easy to come by.

Thank you very much---I purchased Under the Burning Sun and look forward to reading it.

I'd be curious to hear your thoughts on those Brand books whenever you get around to them. Beyond the Outposts (also published by Leisure like the DeRosso book you recommended) is unpredictable and morally very, very sophisticated, and the imagery and setting in Singing Guns are wonderfully painted in prose. I like most Brand that I've read, but these two and that short story really outshine stuff like Destry Rides Again & The Untamed, though yeah, I like those books too.

Dear Mr. Reasoner, talkin' about the Pulp Mammoth Western I'm lookin' for the February 1947 issue, that lists a novel by William Hopson: A Thousand head North about whom I need infos. Due to the fact that I'm compiling a bibliography of this particular author, there are some changed titles that need to be identified with the originals.
Maybe some of yours readers knows something about the folowing titles:
Six-Shooter from Socorro
A Thousand hed North
Winter Drive

The New Cowhand under the pseudonym of John Sims
I'd appreciate all the help you or yours correspondents will lend to me.
Greetings from Itali,
Tiziano Agnelli.

By the way, Berkeley Livingston seems to be the older brother of Herbert B. Livingston that used the pseudonym of H.B.Hickey to write pulp-stories.
Othere references to be find in the following site:
THE H. B. HICKEY FAN PAGE
Greetings from Italy
Tiziano Agnelli