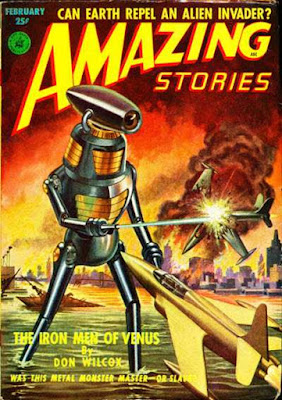 While I was looking for pulp cover scans to use in my Sunday Morning Bonus Pulp series, I came across the February 1952 issue of AMAZING STORIES, featuring the short novel "The Iron Men of Venus" by Don Wilcox. As I looked at that cover, I thought, "I have to read this!" And sure enough, it's actually available as part of Armchair Fiction's double novel series, so I soon had a copy and eagerly dived in.

What was it I landed in? Well, that's debatable. The story is set in a future in which Venus was turned into a penal colony for Earth criminals. However, the descendants of those prisoners have formed their own government and become a sovereign, if somewhat shady, trading partner with Earth. They still harbor a lot of resentment over the past, though, and when they get the chance they launch an audacious scheme to get their revenge and take over the planet that banished their ancestors.

That's a pretty decent back-story, and the method the Venusians use to attack Earth is fairly ingenious, too. It seems that Venus is rich in iron, and some of the iron beams, plates, etc., they ship to Earth are equipped with mechanisms allowing them to move around and assemble themselves into giant killer robots guided by mechanical brains. That's right. They're Transformers.

Wilcox also creates an Earth where nightclubs, restaurants, etc., are located on floating anti-grav platforms thousands of feet above the surface, much like on THE JETSONS. Once again, AMAZING STORIES was there first.

Our heroes are Joe Kane, a working class guy who discovers the Venusians' plot before anyone else, and his comedy relief sidekick Dan "Dynamite" Dinkins. With Earth under attack, they're the ones who figure out everything and come up with a way to save the day.

I have a hunch that a lot of modern SF readers would find this novel terrible. It's not particularly well-written. Coincidence plays a huge part in the plot, and Wilcox's style is strictly meat-and-potatoes for the most part, although there's a surprisingly elegant line here and there. But the main ideas of the story aren't bad, and man, it sure races along. And that cover is great! If you remember this sort of pulp adventure SF with as much fondness as I do, you might enjoy THE IRON MEN OF VENUS. I had a fine time reading it and will read more by Wilcox.

Coincidentally Venus has been high in the morning sky the past several weeks. I shall look upon her tomorrow through a newly tinted lens. Thanks!