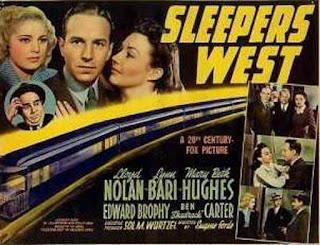 I've never understood why Hollywood bought the rights to the Mike Shayne novels by Davis Dresser, then, with the exception of the first film in the series, based all the Shayne movies on novels by other writers. SLEEPERS WEST, for example, is based on the novel SLEEPERS EAST by Frederick Nebel, with Shayne shoehorned into the plot in a role that could have been filled by any private eye or cop. Haven't read the book, so I don't know what other changes they might have made other than the direction in the title—something that's equally baffling.

At any rate, Shayne's job in this one is get a beautiful blond witness from Denver to San Francisco in time to testify in a high-profile murder case. Her testimony will blow the case sky-high. This assignment is complicated by the presence on the train of a beautiful brunette reporter who's an old flame of Shayne's; her stuffy fiancée; a railroad detective; a mysterious stranger with a briefcase full of cash; and another stranger who has a habit of going around and pointing a gun at people. Will Shayne sort it all out and get the witness to San Francisco in time? What do you think?

This is one of those movies where something is happening all the time, and you'd better pay attention to the rat-a-tat-tat dialogue because it's going to be important later on. It has that in common with the actual Shayne novels, at least.

Lloyd Nolan never played Mike Shayne like the one from the books. He's much more whimsical. I enjoy his performances anyway and don't expect them to be an accurate adaptation of the character. Even so, there are moments when he's suitably tough and gives the impression that he's two steps ahead of everybody else, like the book Shayne. The rest of the supporting cast is good, the production values are high for a B-movie, and watching this one made me want to go somewhere on a train, even though I realize that train travel today is nothing like it was back in the Forties. SLEEPERS WEST is a lot of fun, and I'm glad I watched it.

I haven't seen the film, but the detective in the book is a minor - and very seedy - character.

I found the Shayne box set pretty disappointing.
My fault, really, as I hoped to see hardboiled detective action inspired by the novels or the radio show (which got pretty tough), so the playful, humorous tone of the films rubbed me the wrong way.

Now the Mr. Moto sets-- those did not disappoint.
James, ever see Mr. Moto Takes a Chance? Pure 1930's pulp fiction on the screen.

John,
I don't think I've ever seen a Mr. Moto movie, nor have I read any of the books. I'm not sure how that's possible, but I don't recall it if I have. That's going on my list of things to do, though! Thanks for the recommendation.

There’s a scene in Mr. Moto Takes a Chance where the heroine, shirt torn, is tied to a pillar by the villain in a lost temple in the jungle, while a scurvy bunch of river pirates attack and the heroes mount a machine gun on a tripod in the temple doorway to fend them off.
Now this is a kind of Apex Moment of Pulpy Goodness in the series, but you'd could almost believe H.J. Ward was the cinematographer.
The film is in no way a masterpiece, but any fan of 1930’s pulp fiction is pretty certain to get a kick out of it.

Or slick fiction...the Moto novels were in the Saturday Evening Post, no?

At least they didn't quite Matt Helm Shayne in the films...

I'm still looking for any of the Mike Shane movies starring Hugh Beaumont if anyone has any leads.

As Todd mentions, the ironic thing about the Mr. Moto series was that the serials all appeared in the SATURDAY EVENING POST. John P. Marquand, the author, never appeared in the pulps. All his work was in the slicks or in the best selling novels that received good reviews as literature.

I have that boxed set so will have to watch Sleepers West. I grew up reading the Mike Shayne mysteries as they were a favourite of my father's. I still have most of the paperbacks he read.