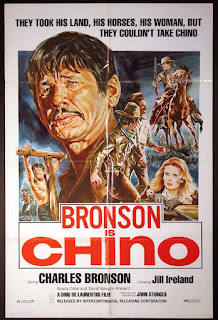 This is another Western movie I missed somehow when it was new, surprising because it stars one of my favorite actors, Charles Bronson. Although it's a Spaghetti Western of sorts, filmed in Spain with a largely Italian and Spanish cast and crew, in addition to Bronson the cast includes Jill Ireland and Vincent Van Patten, the screenplay is by Clair Huffaker (based on Lee Hoffman's Spur-winning novel THE VALDEZ HORSES), and the movie was directed, at least in part, by John Sturges.

Bronson, who is fine as usual, plays horse rancher and bronc buster Chino Valdez, who's content with his lonely life until a young drifter named Jamie (Van Patten) shows up looking for work and a place to stay. The two gradually develop a sort of father-son relationship. Complicating Chino's life even more is the beautiful half-sister (Ireland) of the local cattle baron who'd like to push Chino off his land. The romance that springs up between them seems to be doomed from the start.

With that set-up and the pedigree of the people involved, CHINO really should have been a better movie. It suffers from a very slow pace and a lack of action, although the few fights between Chino and the rancher's men are well done. The ending is unsatisfying, too. Throw in a musical score that doesn't seem to fit, and you've got an oddball film that's not very good.

But I'm glad I watched it anyway, even if it's just for Bronson's screen presence. He always dominates the screen, whether he's fighting for his life against four men or carrying around a newborn foal. His off-screen chemistry with Jill Ireland makes his scenes with her work pretty well, too. So if you haven't seen this one, it's worth watching if you're a Bronson fan, just don't expect too much.
Posted by James Reasoner at 5:30 AM

The film was shot in Spain (in Almería, of course) with the title Caballos salvajes. It was a coproduction between Italy, Spain and France. The italian title was Valdez, il mezzosangue. John Sturges did not finish the film, but Duilio Coletti.

I think it was in their pre-nup that Jill had to be in all of Bronson's movies.

I have fond memories fit because my then four year old son sat on my lap for most of it though as I recall he did doze off after half an hour or so.