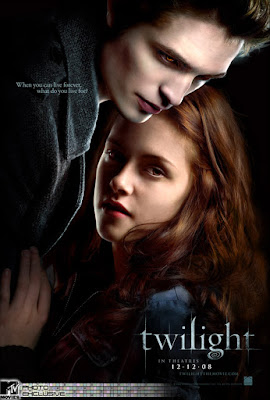 The rest of the family watched SHOOT ‘EM UP with me, so it seemed only fair that I watch TWILIGHT with them. In writing about movies here in the past, I’ve commented that I wasn’t the target audience for various films. Well, I was wrong. This is the movie for which I’m really not the target audience.

I don’t think there’s any need to go into the plot. Even if you have no interest whatsoever in the books or the movie, I’ll bet you’ve absorbed the basic story anyway from all the hype. (It’s a form of osmosis, I think, but I’m not sure since high school biology was a long time ago.) So what did I like or dislike?

Well, the first half is awfully slow and broody and full of teen-age angst. However, I liked the supporting cast. They looked and acted like actual high school kids, rather than actors in their mid-to-late twenties pretending to be high school kids. And the Pacific Northwest scenery is pretty.

The pace starts to pick up in the second half, and I got caught up in the story to a certain extent. Pretty good action here and there. And lots and lots of foreshadowing for the rest of the films in the series. This one might as well have ended with a “To Be Continued” graphic.

So, to put TWILIGHT to the ultimate test for a film that’s “not my kind of movie” . . . I watched the whole thing and stayed awake all the way through. Make of that what you will.

Your post makes me feel better, because I kind of liked this movie myself.

I stayed awake through the book, but it was awful. I won't be reading any others in the series, and I definitely won't be watching the movie.

"Twilight" hype reached such awesome proportions that I felt moved to see what the fuss was all about. I tried the novel but Meyer's leaden prose defeated me after about 50 pages. So I tried the movie and was pretty surprised to find that it wasn't bad. It has a nice gloomy/moody look and became pretty entertaining in the second half. Not a great vampire movie, but tolerable. If you want to see a great vampire movie, see the recent Swedish film "Let the Right One In"--possibly the best vampire movie I've ever seen. And one more comment: rising star Kristen Stewart (Bella) isn't given much to do in "Twilight" except to look good, but I saw her in "Adventureland" which was released Friday, and she's quite good.

Leaving aside the novel it's based on, the ads/trailer for this one, with the dreamboat vampire demanding "Say It!" and Stewart responding "Vampire!" as if they were in a perfume commercial was mightily dissuading.

As one of the audience that 'Twilight' was aimed at - well, I would rather watch Shoot 'Em Up.