The Book of Lies - Brad Meltzer 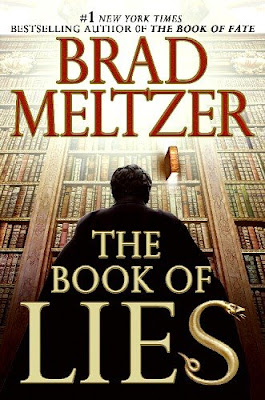 I’d read one novel by Brad Meltzer, the similarly-titled but otherwise unconnected THE BOOK OF FATE, as well as one trade paperback reprinting a story arc from his run as the writer of the Justice League of America comic book. Both of them were pretty good, so I didn’t hesitate to give his most recent novel a try. THE BOOK OF LIES combines two of Meltzer’s interests, thrillers and superheroes.

Cal Harper is a former Immigration and Customs Enforcement agent who resigned after fouling up a case, and now he works with a homeless shelter in Fort Lauderdale. One day he runs across a homeless man who’s been wounded in a shooting, and this victim turns out to be Cal’s long-estranged father, who went to prison when Cal was a kid for accidentally killing Cal’s mother during an argument. It doesn’t take long for Cal to discover that his dad is now mixed up in some sort of dangerous conspiracy and trying to help him out puts Cal in danger, too, from a mysterious assassin. All of this turns out to be tied in with the unsolved 1932 murder of Mitchell Siegel, the father of Jerry Siegel, who was one of the creators of Superman.

Meltzer takes this actual bit of comic book history and spins a very elaborate yarn around it involving centuries-old conspiracies, war, murder, crooked federal agents, and a mystery dating back to biblical times. Does the whole thing border on being a little silly and over-the-top at times? Yeah, probably. But Meltzer keeps the pace moving along briskly and creates a likable protagonist in Cal, along with several hissable villains. It’s all pretty entertaining, and I definitely intend to read more of Meltzer’s novels, as well as his comic book work.

One stylistic note: There was a time when I wouldn’t have read a book like this, because it mixes not only first-person and third-person POV, but also past tense and present tense (first person present and third person past, to be specific). But I’ve gotten a little more tolerant of such things in recent years, and Meltzer makes it work pretty well here.

The first-person present tense in this book drove me crazy. I'm pretty okay with mixing first person and third person, but the present tense just annoyed me.

I'm not a fan of the technique, either, but that seems to be Meltzer's style. I got used to it.

The stylistic quirk that's always bothered me the most is not using quotation marks with dialogue. I'm not sure I'll ever get used to that one.

I hate the mixing of first person and third person in a book. I don't see any reason that can justify it. If the limitation of first person restricts the story an author wants to tell, then do the whole thing in third. The first writer i saw mix pov was Ed McBain. (I'm not saying he was the First to do it, just the first that i noticed.) I hated it. If i know that is how a book is written, i won't read it. To me, it's "look at me being creative in my writing, aren't i cool." Adding a mixture of tenses as you described, James, would exacerbate what i already dislike. Now, dialogue without quotations? I can get use to it. Cormac McCarthey writes that way. Guess I'm a stick in the mud.

I used to be the same way. If I picked up a book and saw a mixture of first and third person, back on the shelf it went. It just got to be such a common practice among today's writers that I gave up and started reading some of them anyway. Sometimes it still bothers me, sometimes it doesn't. I guess it depends on how good the author is at all the other aspects.

The first time I read a novel with first and third--at least where I noticed it--was Robert Crais' "LA Requiem." He pulled it off magnificently. Then we got books by Harlan Coben and Jonathan Kellerman and other bestsellers doing it and I never felt it worked quite as well. For that matter, Crais did it in subsequent books and didn't feel he pulled it off quite as well. It's tricky, that's for sure.

I wonder if the technique comes from movies, because I know I've seen a lot of them that have a voice-over narrator for some of the scenes, but then other scenes take place where the narrator obviously couldn't have observed them.

James, you mention movies. To me it's a similar violation. If there is a character narrating sections in first person, then that should be the POV of the movie and his character should be in every scene. I'm thinking of the wonderful film Farewell, My Lovely with Robert Mitchum. I haven't seen it in awhile but my memory of it is Marlowe is in every scene. These are creative choices that writers and filmmakers make. I think the most effective are the ones that stay more pure in the treatment of POV. That's my take.