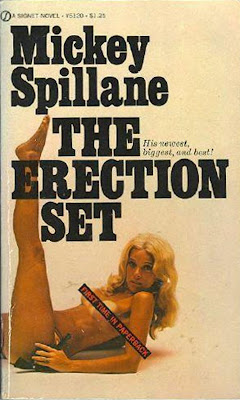 Bob Randisi mentions this cover in his comment a couple of posts down. For the one or two of you out there who have never seen it, here it is. (I imagine a lot of you have this book on your shelves.) This is the paperback edition. The hardcover edition is uncensored, but I'm a little leery about posting it. Don't want Rough Edges to get a reputation as a nudie blog. (Does anybody under the age of 50 use the word "nudie" anymore?) That's Sheri Spillane, Mickey's wife at the time. I believe she's also on the cover of THE LAST COP OUT, the novel that came after this one. I remember thinking that THE ERECTION SET was an okay novel, but not up to the level of the Mike Hammer books.
Posted by James Reasoner at 11:19 PM

Yep, this one is on my shelf. It wasn't the best Spillane, I agree, but for a young male like myself at the time, the cover more than made up for it.

No Mr. Reasoner, the word "nudie" is not used much these days. Has a nice sound to it, though. I like those old-school words.

As I remember after 30+ years, it struck me as an expansion and rewrite of a novelette that appeared in the Spillane collection, THE TOUGH GUYS, which I'd read a few months before. I wondered at the time whether the higher page count reflected an effort to appeal to the Harold Robbins market. The hero nails a bad guy's body part to the floor, like Mike Hammer does in THE GIRL HUNTERS. In THE GIRL HUNTERS, it was the bad guy's hand. In ES it was another body part.

I've read THE TOUGH GUYS, but it was a number of years after I'd read THE ERECTION SET, so I didn't recognize the similarities. May have to reread both and check that out, one of these days. Although I hardly ever reread anything anymore. I've realized I'm going to run out of time before I run out of books.

I agree, JR! My private library has always had more books in it than my capacity to read them; probably because I buy too many, I guess. I only reread a book for a reference, article or review purpose. One of the last I reread was 'Shane' since I'd been sent a sequel (which happened to be damned good, as it happens).

THE ERECTION SET is an expansion of the novelette, "The Bastard Bannerman," collected in THE TOUGH GUYS but originally published in the latter-day male pulp, SAGA (June, 1964). One of Spillane's very best shorter works is, you're right, one of his weaker novels, though hoo-hah, with that cover, who cares?

Okay, you realize now that you have to post the cover of THE LAST COP-OUT?
The book isn't a sequel to THE ERECTION SET, but the cover sure is.

Nik, what's the sequel of SHANE?

Juri, the sequel's called DEATH IN THE VALLEY but is still only in manuscript form. I'm trying to obtain permission for the author to use the characters from SHANE - he's been faithful and true to the original. It's certainly worthy of publication in my opinion. I approached Random House quite a while back but got no response.

The website http://www.besthealthmed.com. aims at helping out people seeking comprehensive health information on health related issues such as hair loss, weight loss, sleep problems, erectile dysfunction, quit smoking et al and the resource page of the site functions in sync with the same objective by including health related useful links.