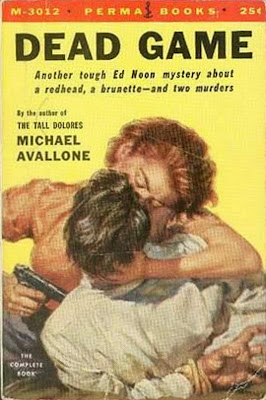 In the spirit of full disclosure, Mike Avallone was my friend. When I was a kid, he was one of my favorite writers as soon as I read my first novel by him, which was also the first novel in Ace's MAN FROM U.N.C.L.E. series. As I may have mentioned before, that was the book that made me realize a writer could have a distinctive voice, that the work he produced could sound so unique that it couldn't possibly have been written by anybody else. And to this day, I love a book like that, even goofy little gems like the ones Avallone so often produced, like his MANNIX tie-in novel and his entries in the Nick Carter series.

Years later, a mutual friend put me in touch with Mike, and we corresponded for years after that, off and on all the way up to his death. I know the stories are legion in the publishing business about how hard he was to work with. I know how quick-tempered he was and felt the brunt of it myself on occasion. I know that a lot of his books, especially the later ones, weren't very good. But he was still my friend, a guy who loved pulps and movies and baseball, and a lot of his books, especially the early novels about his most famous character, private eye Ed Noon, are pretty darned good.

Which brings us to DEAD GAME.

I thought I had read all of the Ed Noon novels except for a few late ones that were published only in , but when a friend of mine sent me a copy of this one, the third in the series, I realized I hadn't read it. Sitting down to read an Ed Noon novel that was new to me is a treat I figured I'd never have again. DEAD GAME didn't disappoint me, either.

It starts simply enough, with Ed being hired to tail a cheating husband. That's what the guy's wife tells Ed, anyway. But instead of visiting a girlfriend, the man heads for the Polo Grounds instead, to take in an exhibition baseball game between the New York Giants and a visiting minor-league team. Then in the ninth inning, in the middle of the action, the minor-league team's third baseman is somehow stabbed to death, and the guy Ed's been following rushes onto the field to search the dead man's uniform before getting away. Ed is left with the questions of who murdered the third baseman, and what was the man he was tailing was looking for.

Well, things get even more complicated than that, of course. A cop gets killed along the way, putting Ed on the bad side of his old friend, Captain Michael Monks. Ed runs into a beautiful redhead and an equally beautiful brunette, the latter named Mimi Tango, one of the great, oddball character names Avallone could come up with. There's a lot of banter, a few fistfights, and Ed gets hit on the head and knocked out a couple of times, a private eye cliché but one that I happen to enjoy. Finally, there's even a gathering of all the suspects where Ed explains what happened and why, leading up to one last burst of action. The "impossible crime" nature of the murder in the middle of the baseball game sort of gets lost in the shuffle along the way, and when the explanation does come, it's hardly what you'd consider a "fair play" solution. But I don't think that's what Avallone was going for. A book like DEAD GAME is supposed to be fast, flippant, and fun . . . and it is.

Love, love, love that cover.
Can't think of another quite like it.
That savage, distaff-driven kiss of death, pistol jammed brutally into the guy's ribs, and (best of all) his bound hand in a spastic rictus-claw!
Man, that is a serious smooch right there.

I have the book but haven't read it. Figured the cover was reason enough to keep it on the shelf. Reckon I'll finally get it down and read the thing.
Thanks.

Great review, James. I'll look for his PI novels. They sound worth a read.

Of the TV tie-ins, would you say U.N.C.L.E. was Avallone's best work? Wondered if the MANNIX or HAWAII 5-0 were more gritty/adult in nature than the broadcast episodes?

I've read both the Hawaii 5-0 books but don't really remember much about them. I'd say they were pretty close to the TV series. I recall the Mannix novel as being more adult in nature than the TV show. It has some sex and nudity in it, anyway. A lot of U.N.C.L.E. fans don't like Avallone's novel because all the details don't match up with the TV show. But they're not taking into consideration the fact that he wrote it from the series bible, before any of the episodes ever aired. So the differences aren't really mistakes, as some fans claim. I've also read the claim that the editor at Ace, Terry Carr, rewrote Avallone's manuscript so completely that it's more his work than Avallone's. I have no way of knowing the truth of that, and I cast no aspersions on the veracity of the person making that claim, but I've read that novel several times and it strikes me as pure Avallone. If Carr rewrote it, he did a really, really good Avallone imitation.

I like Avallone, too, especially his humor. I wouldn't put him in my top tier, in that regard, but definitely in my second tier. I'm also an old movie buff, so I enjoy the many movie references he makes in his Ed Noon novels. I think my favorite Avallone is the one book I've read from his soft-core "Coxeman" series, one of the many rip-offs of Clyde Allison's 0008 series. Avallone used the pseudonym "Troy Conway" and the book is "I'd Rather Fight Than Swish". Not too much action in terms of plot (and in writing about any soft-core books it's almost impossible to avoid bad puns), but plenty of "action" in terms of, well, you know. And all of it rates high on the hilarity meter. Thanks for reminding me of this extremely prolific author, James.

Was I friends with Mike Avallone? That's a tough one. I met him in a Manhattan Penthouse apartment--his agent's, I think--and found him charming. Every time we saw each other he'd give me a big hug, but it got so I'd have to check my back for a knife afterwards. He eventually accused Bill Pronzini and me of trying to "keep him down," and I had to stop opening my mailfrom him--of which there was a lot! He'd write little messages on the outside of the envelope, as if he thought of it after he sealed the envelope.
Were we friends? Probably not, but inspite of it all, I liked him. It was a thrill to meet him because I had read his books when I was younger. So I guess I wouldn't trade that for anything.

The February Doll Murders was my first read of his. After that I think I read most of his stuff except for the gothics, and the Partridge Family book.

Yeah, I remember when you and Bill were having trouble with him, Bob. There's no question he alienated a lot of people who were predisposed to like him.

THE FEBRUARY DOLL MURDERS has a great cover, if I'm remembering the right book.

Ah, Avallone. Ah, THE MAN FROM UNCLE. Mike wrote that one in one day. And yeah, James, I’ve read that one a couple of times too and it’s definitely Grade A Avo. The story I got was that, having been written in a 24-hour period, the manuscript was, shall we say, messy—cross-out edits, margin additions—a real mess. Had to be retyped and (surely) tightened up, but isn’t that an editor’s job? I suspect the extent of that touching up amounted to a virtual retyping, which is where the rewriting nonsense gets stirred up. But then, they only paid Mike a grand for that one (flat fee) and since you can STILL find the thing in any sizeable used bookshop, well, I don’t know any writer who wouldn’t feel they’d gotten shafted, especially given the flair of that particular book. But I always told Mike that $1000 was damn good pay for a day’s work at the typewriter.

As for Avallone’s “trouble” with my old friend, Bill Pronzini, this stems from Bill singling Mike out as the only writer worthy of a full chapter of derision in those old GUN IN CHEEK books. Not only that, but Avallone was the only living, working writer covered when those books were first published. Given that Mike was having a tough time struggling to survive in the marketplace (writing house name and novelization work for $1500 a pop), it seemed to many of us a mean-spirited thing to do, kicking the old man when he was down. Yes, there are hilarious Noonisms throughout Avallone’s work and no one need be off limits when it comes to literary criticism, but I’ve discussed this with Bill in the years since and I do believe in retrospect that he regrets his approach to Mike’s material in those books.

Your theory about how the rewriting story came about on the U.N.C.L.E. book makes perfect sense. It sure never read to me like anybody but Avallone. And yeah, that book must have sold a ton. Whittington was really upset about getting paid so little for his book, too. I don't blame them for feeling that way, although of course when they took the jobs, I don't imagine anybody thought the TV show would be so popular and the books would sell so well.

So Steve, how did I get lumped in with Bill? I was never anything but nice to Mike, until he started seding me poison mail. That's when I stopped opening the envelopes. Still huggedme whenhe saw me, though.

That's my fault, I used the phrase "you and Bill" in my response to your earlier comment.

One thing you can say about Mike, he was memorable. I mentioned him once to George Engel, Lyle's son, and George immediately recalled stories about Mike working for Lyle back in the Fifties, and then of course on the Nick Carter series. It was fun reading interviews in various fanzines with Mike and Lyle in which each of them claimed to have come up with everything in the Killmaster series. I always suspected that the truth was somewhere in between.