One More Reason I Love the Internet 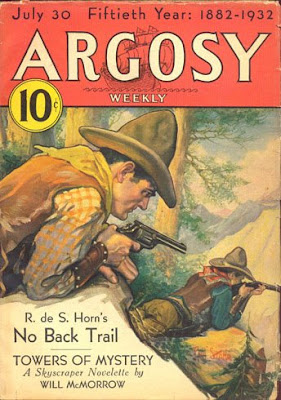 I got an email this morning from the great-niece of pulp author and editor Roy deS. Horn, who found a mention of him in a blog post of mine from last year. She was trying to find out more about his work, so I sent her the list of his stories from the indispensible Fictionmags Index and suggested that she explore the site herself. Now, without the Internet, what are the odds that I would have ever made contact with a relative of Roy deS. Horn, a mostly forgotten writer whose name I've seen on dozens of pulp issues?

Posted by James Reasoner at 1:43 PM

I love it too. Last night before a play version of ONE FLEW OVER THE CUCKOOS NEST, we began to list Jack Nicholson movies. We couldn't think of THE LAST DETAIL, but someone nearby (who we were probably annoying on end) had a cell with Internet access and checked IMDB and our minds were clear when the play began. (Someone kept insisting it was Cinderella Liberty and I knew that was wrong)

Yeah, that's way cool. I'm not that familiar with Roy deS so I will scour your back pages now...

Yeah, that's happened to me many times, with Finnish and foreign writers. I once got an e-mail from a daughter of Lionel Olay who wrote one paperback original in the early sixties and knew Hunter S. Thompson. Too bad, she (the daughter) didn't answer my e-mail that I wrote to her.

Glad to contribute to the conversation. In the 1930s and 40s Uncle Roy was an editor (for Random House, I think) and author, clearly -- and we knew the former but I, at least, didn't know the latter. He also was a graduate of Annapolis and wrote "Navy Blue and Gold" --the alma mater of the Naval Academy--but did not serve because he lost an eye in an accident. In late life he was an editor of The Naval Review.

IMDB is also interesting -- it gave me a leg up on my paternal great grandmother's cousin Ambrose Barker who was a vaudeville performer (with his wife Peggy Wynne)throughout the British Empire in 1920-1935 before settling in Californa where they had bit parts in movies in addition to their day jobs. I still write to courthouses for files but there's more and more on the internet for family genealogists.

If anyone is interested, I'd be happy to correspond. My e-mail is Kate dot McCain at ischool dot drexel dot edu.