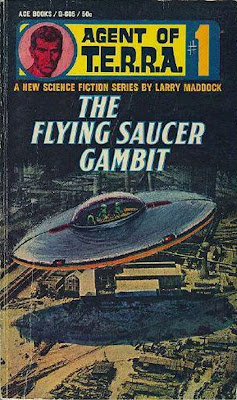 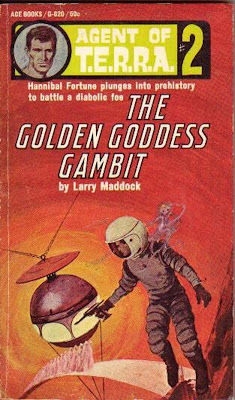 I learned today that author Jack Jardine passed away last week. I didn't know him, but I have very vivid memories of reading and enjoying the books he wrote during the Sixties under the pseudonym Larry Maddock. As a science-fiction fan and also a huge fan of all the secret agent novels, movies, and TV shows from that era, I was definitely a member of the target audience for the Agent of T.E.R.R.A. novels. Luckily, they were intelligent, well-written, and very entertaining. Here are the covers from all four books in the series. Rest in peace, Mr. Jardine. 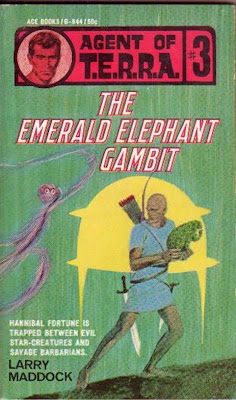 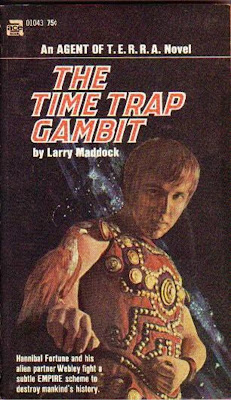 Posted by James Reasoner at 7:52 PM

I loved this series, particularly the final book which was vastly superior to the earlier titles, At one time very early on, I counted it among my favorite titles. Sad to hear he is gone as is JG Ballard who passed today.

I have the first three of these. Need to get the fourth.

I only read these once, back when they were new, but my favorite was the first book. I have no idea how well they would hold up to rereading now.

As far as I recall, I've never read anything by Ballard. One of many writers I've just never gotten around to but should have.

Sorry to hear about his passing. The series was a favorite when I was a teenager, a;ong with Ace's The Man From U.N.C.L.E. I, too, think the first was the best of the four and it's been about as long since I read them.

Bill, if we can get together< i'll send you the fourth book. I have an extra copy.

It's nice to know who "Larry Maddock" was and sad to learn that he's died. There was nothing else written as by Maddock and Jardine isn't a familiar name either yet when I read these books, back as a kid, when they first came out, they seemed reasonably knowledgeable about SF and time travel. I wonder how that happened. I have fond but vague memories about these books. Sort of wished they'd gone on longer but, like you, seemed to recall that the first was the finniest and the best while the last book, obviously written after the series was canceled but finished anyway, was a much more involved and thoughtful work.

So -- does anyone else remember The Time Machine series from Boy's Life by "Donald Keith?"

Sorry to hear about that. I have the firest of these but have never even seen the covers on the other three. I enjoyed the first pretty well.

I remember those stories in BOY'S LIFE. I was only a Scout for one year but subscribed to the magazine for years because of the great fiction in it.

Thanks, George. I've never read any of Ballard's books, and I really ought to. I was at Half Price Books today and meant to look and see what they had by him, but I forgot. I have a notebook I use to write down things like this, but then I forget the notebook . . .