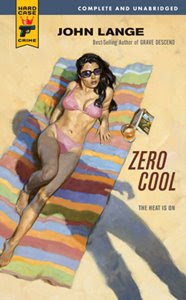 I remember seeing the original editions of this book and others by John Lange, who was really Michael Crichton, but even though they seem like the sort of book I would have read back in the Sixties and Seventies, somehow I never got around to them. Now with Hard Case Crime bringing some of the John Lange titles back into print, I get a chance to read them without having to hunt up those pricey original editions.

ZERO COOL is more of a thriller than a mystery, although its protagonist, radiologist Peter Ross, has plenty of mystifying things to figure out during the course of the book. He’s in Spain where he’s supposed to present a paper at a medical convention, when he gets involved with a beautiful young Englishwoman, assorted Spanish and Italian and Arab villains, an American who wears buckskins like a frontiersman, and a corpse that goes missing after Ross is kidnapped and forced to perform an unorthodox surgical procedure on it. Everything is fast and breezy and a little over-the-top from the get-go, and the book becomes more bizarre as it goes along. I should have loved it.

But from all the good reviews I’ve read, I seem to be the only person who didn’t care much for this book. It’s not bad, mind you. I found it to be sort of entertaining, but I didn’t care much for the hero and despite the fast pace of the prose itself I thought the plot took ’way too long to develop. The first half of the book is a bit repetitious with the various gangs of hoodlums taking turns kidnapping and/or threatening Ross. The second half, where things actually start to move the story forward, is better. But Ross is still a dumb and not very sympathetic hero.

I enjoyed ZERO COOL enough so that I’ll certainly read Hard Case’s other John Lange reprint, GRAVE DESCEND, which I also have. I hope I like it better.
Posted by James Reasoner at 2:11 PM

I skipped this one because I didn't care for Grave Descend very much. It wasn't a terrible book, but it wasn't good either. Very Blah.

I've read five of the Langes. Easily, the best is The Last Tomb(Easy Go). An unknown tomb found in Egypt. A team comes together with an intricate plan to spirit the treasures out of the country.

Any Idea if there is any truth to the rumor that John Lange was a psydonym for Michael Crighton?

I think Crichton has acknowledged that he wrote the John Lange books.

I'll belatedly pop in and add that John Lange, a professor who has published extensively, mostly fetishist novels in the "Gor" series, as "John Norman," just confuses this matter. Apparently, Crichton's use of Lange was a complete coincidence.