Friday's Book You Have to Read: The Siamese Twin Mystery -- Ellery Queen 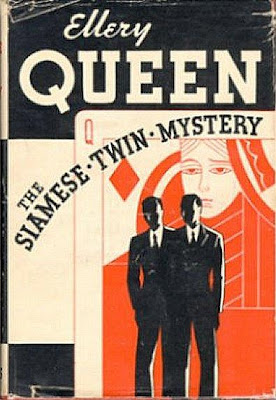 Ellery Queen is probably my favorite of the so-called Golden Age of Detection authors. I’ve read most of the books that were actually written by Frederick Dannay and Manfred B. Lee, the cousins who were the creators of the Queen pseudonym and the Ellery Queen character, as well as some of the later, ghosted books. I’ve never read a bad one among the Dannay/Lee books, and I’ve liked all the ghosted ones I’ve read, too.

But my favorite Ellery Queen novel is THE SIAMESE TWIN MYSTERY, so that’s the book I’ve chosen to write about this week in another installment of The Books You Have to Read. I enjoyed the Queen books for their elaborately constructed puzzle plots and for the characters of Ellery and his father, Inspector Richard Queen. THE SIAMESE TWIN MYSTERY, originally published in 1933 but readily available in paperback reprints from the Sixties and Seventies, adds some elements that aren’t all that common in the other Queen novels. It’s a little more bizarre than most, with a plot that includes a scientist who may or may not be mad and an isolated mountain lodge for a setting rather than Manhattan or Hollywood or even the small town of Wrightsville, the locations of most of the other Queen novels. Mainly, though, what THE SIAMESE TWIN MYSTERY succeeds in doing like no other Queen novel I’ve read is creating an almost unbearable feeling of suspense that really had me flipping the pages when I first read it about forty years ago. Dannay and Lee don’t let up on that suspense, either, until the very last line of the book, which I’ve never forgotten even after all this time. I really don’t know how the plot holds up now, since I haven’t reread it in a long time, but I do know I enjoyed the heck out of this book.

Since it is rather atypical, THE SIAMESE TWIN MYSTERY might not be the best place to start if you’ve never read an Ellery Queen novel . . . but if you’ve never met Ellery and his dad, you really ought to.
Posted by James Reasoner at 8:32 AM

I used to read these as a teenager and loved them. I have to revisit as an adult. Thanks, James.

I love the Ellery Queens. I wonder if you've read the four Drury Lane novels they originally published under the name Barnaby Ross. I'd read The Tragedy of X and recently I came across a volume that had the first three, as well as the fourth in a separate volume. I haven't gotten to them yet though. You know how it is. To many books and not enough time.

I've read at least one of the Drury Lane novels, but it was forty years ago and I have no memory of it except that I enjoyed it. A friend recently sent me a copy of THE TRAGEDY OF Z, and I hope to read it soon. Other Queen novels I recall really liking are THE FINISHING STROKE and THE ORIGIN OF EVIL.

Oh, and the short novel "The Lamp of God", which I think is in THE NEW ADVENTURES OF ELLERY QUEEN, is wonderful, if a little over-the-top in its impossible crime nature.