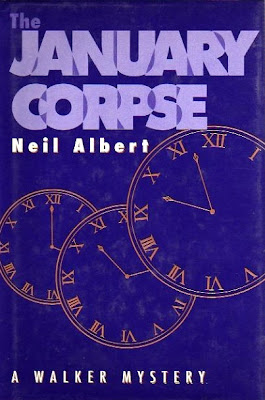 I read this book for one reason: Kevin Burton Smith wrote eloquently about it on the Rap Sheet a couple of weeks ago, in a post that was part of Patti Abbott’s Friday’s Forgotten Books blog project, and it sounded interesting. I’m glad he did, because I enjoyed THE JANUARY CORPSE quite a bit.

Dave Garrett is a disbarred lawyer now working as a PI in Philadelphia. He’s hired to investigate the disappearance of another lawyer seven years earlier, not to find out what happened but simply to provide evidence in a presumption of death hearing in which the missing man’s family is trying to have him declared dead. It quickly becomes obvious to Garrett that more is going on, though, as mobsters try to scare him off the case and other strange things crop up, like a hundred grand in missing money.

The author of this first novel, Neil Albert, does a pretty good job of making the reader think this is going to be a very generic first-person private eye yarn, then layering in some unusual elements that elevate it to a higher level. It’s difficult to talk about them without ruining the plot, so I’ll just recommend that you read the book yourself if you come across a copy. All the reviews quoted on the book talk about the huge twist at the end, and for what it’s worth, I picked up the clues Albert plants right away and saw it coming very early on. You probably will, too. But it’s still something you don’t come across very often, if ever, in a PI novel, and Albert succeeds in creating such a likable narrator that this is one of those rare occasions when figuring out the plot ahead of time didn’t make me stop reading. There are several other novels in this series and I don’t know yet if I’ll read them or not, but I liked THE JANUARY CORPSE. It’s a worthwhile Forgotten Book.
Posted by James Reasoner at 9:38 PM