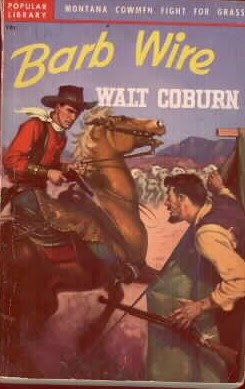 Walt Coburn has to be one of the most inconsistent Western writers I’ve ever encountered. STIRRUP HIGH, his fictionalized memoir of growing up on one of the largest cattle ranches in Montana during the early 20th Century, is one of the best books of its type that I’ve read. Many of his hundreds of stories published in the Western pulps are excellent. But at the same time, many of his stories are terrible, mostly from the late Forties on, when he began having more of a problem with alcohol. And his novels, to me, are seldom as good as his shorter works, because the longer length provides more of an opportunity for his weaknesses to surface.

BARB WIRE, one of Coburn’s early novels, is a mess. Highly entertaining in places, but still a mess. The plot is a simple one: A villain from back east encourages farmers to move into ranching country, knowing this will provoke a cattlemen vs. nesters range war, after which, when both sides are wiped out, the bad guy can move in and take over. Certainly that plot wasn’t as old in 1931, when the book came out, as it is now, but it had whiskers even then.

BARB WIRE is set in the 20th Century, complete with telephones and cars, and that allows Coburn to indulge in one of his favorite themes, the passing of the Old West and the end of ranch life as the old-timers knew it. The other dominant theme in his work is the resurfacing of complications that have tragic origins in the past. Coburn can give Ross Macdonald a run for his money when it comes to this element of his plots.

And ultimately that causes most of the problems in BARB WIRE, because Coburn crams dozens of characters into the story, all of them with at least one melodramatic connection with the other characters. You’ve got your nominal hero, rancher’s son Buck Rawlins, who’s in love with Colleen Driscoll, the daughter of Bob Driscoll, the former partner but current enemy of Dave Rawlins, Buck’s father, who were both friends with Uncle Hank Mayberry, the local banker whose son-in-law is in cahoots with the Evil Easterner. Buck thinks that Colleen is in love with Bill Murdock, whose father Angus Murdock is hated by the cattlemen because he raises sheep (you knew there had to be some sheepherders in here somewhere) and is blamed for a murder and a prairie fire really caused by, you guessed it, the henchmen of the Evil Easterner. Then you’ve got the Nighthawk, a dashing and good-hearted outlaw who used to be a cowboy but now robs trains because he hates the railroad because he blames it for the deaths of his father and brother, and of course the Nighthawk is also friends with Buck Rawlins and is opposed to the schemes of the Evil Easterner. Not to forget the psychotic gunslinger who has a hook in place of his left hand, a despised son who wants to be a preacher, and an old enemy who was thought to be dead but is really still alive and working for, who else, the Evil Easterner.

I’m sure you get the idea by now. There’s just too blasted much going on in this book, and while Coburn keeps his various plot threads under control well enough so that the reader never gets lost, after a while it’s exhausting keeping track of things. Coburn’s tendency to every so often drag in some new characters from out of left field complicates matters even more.

Despite all of that, however – or maybe because of it – the book does have an epic feel, and it’s packed full of very stirring and well-written individual scenes, too, with a lot of operatic, over-the-top action. A real sense of authenticity comes through, as well. The plot may be a little unbelievable, but the details of ranching life in Montana come across as completely realistic. All of it wraps up with a poignant and very effective ending. So if you come across a copy of BARB WIRE and decide to read it, I certainly wouldn’t advise you not to. Chances are you’ll be entertained. Just be prepared for a certain amount of goofiness as well. (This review was originally published in OWLHOOT, the Western apa. If any of you are interested in joining, let me know and I'll put you in touch with the right person.)

Posted by James Reasoner at 8:55 AM

I've only read a couple of things by him and don't really remember any of them well. Which says something.

If I've read any of Coburn's novels, I don't recall. His short fiction seems the way to go. Did he have any collections published?

There have been three collections of Coburn's novellas published by Leisure in the past few years: COFFIN RANCH, BORDER WOLVES, and WANTED MEN. These have either two or three stories per book. There's another collection in hardback from Five Star, THE SECRET OF CRUTCHER'S CABIN, that hadn't been reprinted in paperback yet, and I don't know if there are any plans to do so. His short fiction is usually better than his novels, and his work from the Twenties and Thirties is generally better than the later stuff.

Thanks for the info, James. I'll be getting them. There's even a reasonable price for the hardcover.

The hardcover is the only one of the collections I've read so far, but I recall that I liked it quite a bit, especially the first story in it (don't remember the title, but it's a more contemporary Western about drug smuggling along the Mexican border).

What, exactly, is "Owlhoot, the Western apa?"

"Apa" stands for amateur press association. It's a group of fans of a particular writer or genre who each produce a fanzine devoted to that particular subject. They print up enough copies just for the membership of the group (plus a few extras, usually) and send them to a member designated as the official editor, who then collates all of them and redistributes one copy of each fanzine to the membership. In the case of OWLHOOT, every three months I write up assorted reviews, essays, and comments on Western-related subjects and my wife is kind enough to turn them into a nice little fanzine. We send the copies to the OE, as do the other members, and a few weeks later I get back a collection of everybody's zines, including my own. There are apas devoted to all sorts of subjects. Some of them use variations on the name, such as the other two I've belonged to in the past, REHupa (Robert E. Howard United Press Association) and PEAPS (Pulp Era Amateur Press Society), but they're all generally known as apas. The longest-running apa that I know of is DAPA-EM, which is devoted to mystery fiction. I've never belonged to it, but I know some of this blog's readers do.