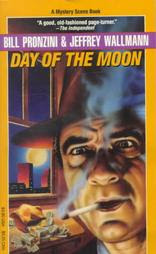 As far as I can tell, DAY OF THE MOON has been published in only two editions, a 1983 British hardback from Robert Hale and a 1993 paperback reprint from Carroll & Graf, making it a perfect candidate for the Friday’s Forgotten Book project. It’s a dandy little crime thriller, tightly plotted as you’d expect from a couple of old pros like Bill Pronzini and Jeff Wallmann and written in terse, hardboiled prose that’s a joy to read.

Flagg (we’re never told his first name) is a troubleshooter for the mob, here known as the Organization. He’s headquartered in San Francisco. As the book opens, he’s looking for the loot from an armored car robbery which has disappeared following some sort of double-cross that left the planner of the heist dead. That job isn’t the only one Flagg has on his plate, though. He’s also investigating a series of hijackings involving trucks and merchandise owned by the Organization, including some moonshining equipment. That ties in with Flagg’s third assignment, which is to find the bootlegger who’s trying to muscle in on the Organization’s illegal liquor operation in the Pacific Northwest. Not surprisingly, the armored car robbery winds up being connected to Flagg’s other two jobs as well.

Flagg reminds me a lot of Donald E. Westlake’s Parker in his low-key professionalism and also in the fact that the reader winds up rooting for him despite the fact that he’s a criminal. He actually comes across as a private eye of sorts, except his only client is the Organization. He shies away from violence, although he’s plenty tough when he has to be, and prefers to rely on his brain rather than a gun. He needs both, though, to untangle this complicated plot. I’m not aware of any other books or stories featuring Flagg and don’t know if he was intended to be a series character, but he certainly could have been. DAY OF THE MOON is a fine, enjoyable novel. One of the reviews quoted on the cover of the paperback refers to it as a “good, old-fashioned page-turner”, and that’s exactly what it is.
Posted by James Reasoner at 6:09 AM

Being a big fan of the Parker series(I've read all but one), this one sounds very interesting. I'll keep it in mind.

I read this years and years ago and can't remember a damn thing about it, except there was a fight in the back of a camper or pickup. I still have it, maybe I'll give it another shot.