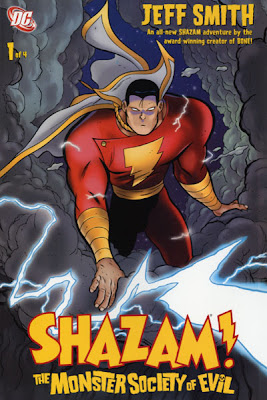 I first heard of Captain Marvel when a friend of mine in junior high sold me some Golden Age comics he had collected. There were several issues of WHIZ COMICS in the batch, and although I enjoyed them, I never tried to accumulate any more of them. Later, of course, DC Comics brought back Captain Marvel in a series now entitled SHAZAM!, after the secret word the character said to transform from young Billy Batson into the stalwart superhero who bore a not-so-coincidental resemblance to Fred MacMurray. I read those, I read the occasional reprinted story from the Golden Age, and I even watched the Columbia movie serial that starred Tom Tyler as Captain Marvel.

Now I’ve read yet another incarnation of the character, as Jeff Smith, the creator of the series BONE (which I’ve heard of but never read), has retold Captain Marvel’s origin and tied it in with a retelling of his most famous Golden Age story, the epic battle against the sinister Mr. Mind and the Monster Society of Evil. That was the first real continued story in comic books, back in the early to mid-Forties, and it just so happens that one of the Golden Age issues I got my hands on in junior high featured a chapter from that long epic. So I already knew the secret of Mr. Mind.

That didn’t detract from my enjoyment of the hardback reprinting of Smith’s four-issue miniseries, though. It’s great fun. The artwork stops just short of being too cartoony. I’m not sure I agree with the decision to make Billy Batson and his long-lost sister Mary so young, and I didn’t care for the political angle that Smith added to the plot, but those are minor points. All in all the story has a nice breathless enthusiasm that’s matched by the art, and there’s hardly a bit of angst to be found. If you’re a fan of the Golden Age Captain Marvel, I think you’ll enjoy this one. I certainly did.
Posted by James Reasoner at 9:52 PM

When I was a kid, Captain Marvel was, by far, my favorite comic book hero. I also liked Mary Marvel and Captain Marvel, Jr. I even liked Captain Marvel Bunny (and I'm not making that up). I've never read any of the more recent incarnations, but this one sounds interesting. I like the Bone books I've read.

My first exposure to Shazam was that horrible, horrible saturday morning TV show. I'm afraid it ruined this character for me forever.

I read the original Monster Society of Evil when it was reprinted and while this one is not as good, neither is anything else. Jeff Smith is a great story teller and I enjoyed this quite a bit anyway.

Bone is an incredible, epic story. Definitely worth reading. I enjoyed Shazam but it was tainted for me as well because of the political stuff. It seemed like wasted comic pages to me and grounds the book in a time period that essentially takes away any long term timelessness of the book after a few years go by. As opposed to Bone, which is a true timeless tale of adventure and romance and fun.

Thanks for the Bone recommendations, Bill and Carl. I'll have to look for those books.