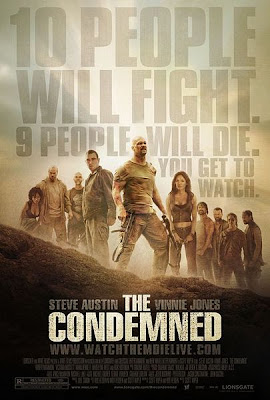 If you’ve read this blog for a while, you may remember that I thought THE MARINE, starring John Cena, was a pretty good rassler-turned-action-hero movie. Now we’ve watched THE CONDEMNED, starring Stone Cold Steve Austin (although he’s billed now as just plain Steve Austin, probably a good move on his part), another WWE superstar.

Austin plays Jack Conrad, an American locked up on Death Row in a South American prison. A sleazy millionaire rounds up violent convicts from all over the world, takes them to a remote South Pacific island, and turns them loose so they can run around and kill each other, with freedom going to the sole survivor. Outwit, outlast, outplay, indeed. And of course the millionaire plans to broadcast the whole thing live on the Internet to an audience that will equal the size of the one for the Super Bowl.

With a long-in-the-tooth set-up like that, a movie needs a smart, witty script, some unexpected plot twists, or preferably both to be very good. THE CONDEMNED doesn’t really have either of those things, so I didn’t think it was anywhere near as good as THE MARINE. What it has going for it are Austin’s impressive physical presence, some nice photography, and a decent supporting performance from the dependably offbeat Rick Hoffman. It’s certainly watchable, but you’ll know everything that’s going to happen in the movie long before it gets there.
Posted by James Reasoner at 4:36 PM

From RINGMASTER to STONECOLD.....

How did thiss happen???

Guys This is how it happened....in his recent interview Stone Cold revieled his secret to his name.....Its really cool!!!


Heyy guys do you know stone colds earlier name was "The Ringmaster"
but he knew this name wont work for him.
One day when her wife asked her to have tea before it gets stone cold.
there he got the name.


Hey guys der if you have brought the dvd of stone colds movie
The Condemned log on to the site
http://sonypictures.in/condemned-dvd.asp
and you can win exciting prices and others can buy the dvd from the above site