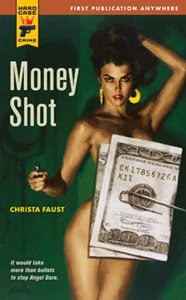 I’d read a lot of positive reviews of this Hard Case Crime novel by Christa Faust (who won the Scribe Award last year for her novelization of SNAKES ON A PLANE), and when I opened it up I found that it’s dedicated to Richard S. Prather, one of my all-time favorite authors. So I was predisposed to like MONEY SHOT. What I wasn’t prepared for was just how good it really is. The plot’s pretty straightforward, with only a few minor twists, but what a voice Faust gives to Angel Dare. The writing propels the action forward at the most compelling pace of any book I’ve read recently and makes the characters come to life. The reader really cares about what’s going to happen to Angel and the few other sympathetic characters and roots for the villains to get what they deserve.

Given the plot, there’s a lot of sex and violence in this novel, of course, but it’s necessary for Faust to tell the story she wants to tell. Still, if that sort of thing bothers you, it might be best for you to skip MONEY SHOT. Otherwise, I give it my highest recommendation. I think it’s one of the best books I’ve read so far this year.
Posted by James Reasoner at 10:31 PM

I would second your recommendation. I wonder if there will be a sequel to this.....

The problem with hype is that nothing can live up to it. I enjoyed this book, but I don't think it lived up to the hype.

I never judge a book by its hype, so I had no problems with pre-conceived notions going into this book.

I thought it was just terrific. Probably the most fun I've had reading this year.

I'm not sure the ending could be said to encourage sequels, but maybe...

I dug it, wasn't too overwhelmed by hype before reading it, and even purchased it at a 10% discount at the local frou-frou supermarket. No discount on the sporadically displayed Penny Press/"Dell" fiction magazines, though, alas.