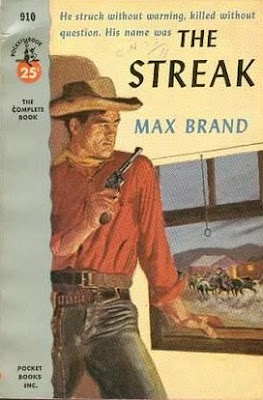 By the time Frederick Faust wrote this novel (which was originally serialized in ARGOSY), he had been turning out Westerns for almost twenty years, and it shows because this is a clever twist on just the sort of plot that he’d been using for a long time. The typical Faust hero is a larger-than-life figure, able to outshoot and outfight any enemy, and of course he can tame the magnificent killer horse that no one else can even approach, let alone ride.

To the people of Jasper Valley, that’s a good description of The Streak, who quickly becomes a legend when he first arrives in the valley, interrupting a hold-up and sending seven outlaws fleeing for their lives.

The reader knows, though, even if the citizens of Jasper Valley don’t, that The Streak is really just easy-going cowboy Blondy Torrance, and his outlaw-taming is nothing more than luck and exaggeration by those who witness it. Likewise with his taming of the wild stallion Rocket. The Streak is a typical Faust hero on the surface, but a sham underneath. The same as in Coburn’s BARB WIRE, the fact that Faust sets this novel in contemporary (to him) times, with automobiles, telephones, and phonographs, provides even more contrast between the mythological Old West that Faust mined for so much of his fiction and the reality of a developing West where the real estate speculator was rapidly replacing the rancher. In the end, THE STREAK is as much a hardboiled mystery as it is a Western, as two of Blondy’s cowpoke friends try to solve a murder for which The Streak is blamed.

Despite the satirical overtones, there’s plenty of action in this book. Blondy eventually does find something of a heroic nature inside him. No modern reader will be surprised by that, or by the identity of the murderer, who seems pretty obvious from the first. But this is still one of the best Faust novels I’ve read, with some keen observations on the nature of legends versus reality and some fine dialogue. Faust wrote like no one else ever did, and most of his strengths are on display here. (Thanks to Bill Crider, who sent me the copy I read.)

(This review also originally appeared in OWLHOOT.)
Posted by James Reasoner at 1:20 PM

Different guy from The Streak whom Ray Stevens sang about, I suppose.

I'm a big fan of westerns with cars, telephones, and airplanes, probably the result of early immersion in the cinema of Roy, Dale, and Gene.

I couldn't agree more, Fred, and it actually makes sense historically when you see old photos of Main Street in small towns with the mixture of horses, wagons, cars, and trucks. And telephones were around earlier than people usually think they were.

Brand's pne of my favorites. Swagger with an undertow of melanchoy giving even his most mythic heroes a reality.

To give it some perspective, the telephone of Alexander Graham Bell was invented the same year as Custer's Last Stand. The first phone west of the Mississippi was installed in Deadwood, South Dakota.

It's a while since I read a Max Brand western, although many were reissued as Black Horse Westerns in the UK and Commonwealth. What I remember most is that many of those mythic heroes were often no larger-than-life musclemen, but ordinary guys who got by foxing their opponents into thinking otherwise.