Superman/Batman: The Greatest Stories Ever Told 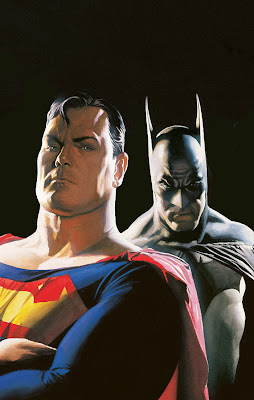 As DC’s best-known characters, Superman and Batman have been teaming up to battle various super-villains for more than fifty years. Since I like both characters, it makes sense that I’d enjoy SUPERMAN/BATMAN: THE GREATEST STORIES EVER TOLD.

Most of the stories in this trade paperback are from WORLD’S FINEST, the comic book that featured Superman/Batman team-ups for most of its run. The first story, though, comes from a 1952 issue of SUPERMAN and tells how Clark Kent and Bruce Wayne learned each other’s secret identities. Up until that time, they had worked together a few times as Superman and Batman but neither knew who was really behind the other mask. From that point until the first reboot of the DC Universe in the Eighties (a move that I still disagree with, but that’s beside the point), Clark and Bruce not only work together to combat the bad guys but also form a lasting friendship. To tell the truth, that sense of friendship is the most appealing thing about many of these stories, which tend toward mild little puzzle yarns with no real sense of danger or adventure. Later, of course, in the stories from the past twenty years or so [Curmudgeon Alert!], things get a lot more grim and angsty, and the art gets more manga-influenced and hard to follow. But they’re still fairly entertaining.

Science-fiction author Edmond Hamilton, who also had a long career in comics, wrote about half the stories in this volume. Curt Swan, the quintessential Superman artist, provided the art for several of them. One short-short about a near-meeting between Clark and Bruce when they were children was written by Jeph Loeb and drawn by Tim Sale, two of my favorite modern comics creators. When I was a kid reading comics, I always regarded WORLD’S FINEST as one of DC’s second-tier titles. Actually, back then I wasn’t all that fond of any of the team-up books, like THE BRAVE & THE BOLD or over at Marvel, MARVEL TEAM-UP. Reading the stories now, though, I find them pretty enjoyable and a nice shot of nostalgia, as well as being well-crafted in their own right. If you like Superman and Batman, you’ll definitely like this volume.
Posted by James Reasoner at 3:40 PM

I remember enjoying the Justice League of America as a kid. That teamed up a bunch of them. Was Wonder Woman just there for show?

It is a must have graphic novel for any fan of DC Universe or particularly for fans of Superman, Batman, or both. I will look for it. Thanks for this post. Buy Viagra Viagra