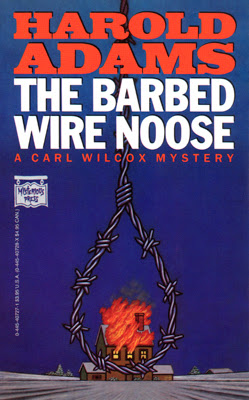 This is another Depression-era mystery set in the small town of Corden, South Dakota, featuring ne’er-do-well detective Carl Wilcox. This time around, while continuing to help his parents run the hotel they own, Carl is also called on to temporarily replace the town’s one-man police force when the local cop falls sick. Naturally a murder coincides with this development, as one of the town’s more enigmatic citizens is hanged with a length of barbed wire. This results in several relatives and associates of the murdered man showing up in Corden, and one of them winds up dead, too. Throw in a blizzard on top of these crimes, and Carl has his hands full sorting everything out.

That’s one of the drawbacks in this book: the plot is pretty complicated, and while Carl eventually uncovers the murderer, I’m not sure everything really hangs together. There are some continuity glitches, too, as a character changes hair color not once but twice, and the timing of a mysterious death in the past is given as five years earlier in one reference and ten years in another. Whether those are minor quibbles or major problems pretty much depends on the reader, I suppose. They bothered me, but I still enjoyed the book quite a bit. Adams has a wonderful way with characters and dialogue, and I love the dry wit with which Carl narrates these books, as well as the convincing but not overdone sense of time and place to be found in them. I’m sure I’ll read more entries in this series, not right away, but fairly soon.
Posted by James Reasoner at 1:19 PM

Mmm... this pulp seems to have a complex plot just what I like in a story. I will buy it in order to read it deeply and give a personal opinion about it. Buy Viagra Viagra