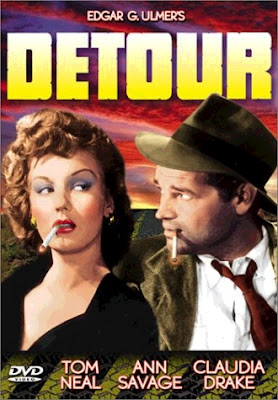 Speaking of movies you’d think I would have seen before now, I just watched DETOUR for the first time. This one has quite a reputation as a film noir, despite its low budget and lesser-known actors. It’s the story of a guy hitchhiking across the country (Tom Neal) so that he can be reunited with his girlfriend. Unfortunately for him, he accepts a ride from someone he shouldn’t, and he winds up having to cope with death, deception, and a dangerous woman -- all the stuff of classic noir, in other words.

For the most part DETOUR works really well. Yes, it looks cheap, but most of it is set in cheap places. I’m just old enough to have experienced first-hand the sort of greasy roadside diners, rustic gas stations, and dingy tourist courts where most of this movie takes place. You could still find plenty of those in rural Texas in the early Sixties. Tom Neal does a pretty good job as the unlucky Al Roberts and provides the usual voice-over narration. And Ann Savage, who plays the femme fatale Vera, is genuinely scary. There’s a moment soon after she meets Neal’s character when she turns her head sharply and looks directly at him for the first time, and her feral expression will send a shiver right through you. I think it’s her performance, and the lines from the script about doom and the arbitrariness of fate, that give DETOUR its reputation.

But the ending of the film is a real let-down. It’s arbitrary, all right, but not in a symbolic way. It’s just abrupt and disappointing and left me with the feeling that some of the movie is missing because of all the things that are set up and then never explored, as if the director said, “Okay, that’s it, we’re out of film.” Maybe that’s what happened, for all I know. I’m glad I finally saw DETOUR anyway. It’s about half of a great film.
Posted by James Reasoner at 12:46 PM