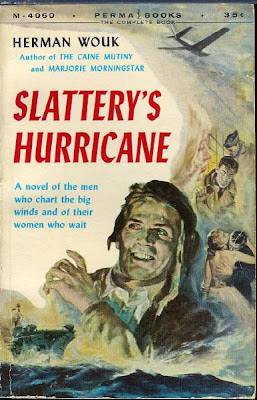 SLATTERY’S HURRICANE is something of an oddity in the career of Herman Wouk. It’s usually not included in the lists of his novels, and I’d never even heard of it until I happened to run across a copy at Half Price Books recently. As it turns out, this paperback original published in 1956 is a novelization of a 1949 movie based on a story by Wouk that was published in the slick magazine AMERICAN. Why there was a seven-year gap between the movie and the novelization, I have no idea.

I’ve never seen the movie, at least not that I recall, but I’ve read the book now and it’s pretty darned good. It’s definitely a Forties-style drama. Navy pilot Will Slattery is passed over for the medal he deserves for sinking a Japanese ship because his squadron leader lies about what happens and claims the honor for himself. Embittered by this experience, after the war Slattery goes to work as a private pilot for a mysterious millionaire and becomes pretty much of a heel, indulging in a series of meaningless love affairs and ignoring the fact that his boss is probably a shady character of some sort. Meanwhile Slattery’s best friend and fellow pilot “Hobby” Hobson stays in the Navy and becomes a hurricane chaser, helping to track the big storms that develop in the Atlantic off the coast of Florida. Hobby also has a beautiful young wife, and when Slattery meets her, sparks fly between them.

Well, if you’ve ever seen very many movies from the Forties, you can predict just about everything that’s going to happen in this novel, from the romantic triangle to the criminal goings-on to the giant hurricane that’s bearing down on Miami before the book is over. It’s the same sort of glossy soap opera that was popular during that era. I thoroughly enjoyed the book anyway because I’m a sucker for that sort of stuff. The movie starred Richard Widmark, Veronica Lake, and Linda Darnell. That should tell some of you all you need to know about the novelization, except for the fact that it’s well worth reading if you should happen to find a copy.

My reading of Herman Wouk’s work has been spotty. I’ve never attempted to get through his giant bestselling historical novels like THE WINDS OF WAR and WAR AND REMEMBRANCE. But I have read his fine early novel THE CITY BOY and his first big success THE CAINE MUTINY and an often overlooked novel from the early Sixties called DON’T STOP THE CARNIVAL (which should have ended one chapter sooner than it did). I read YOUNGBLOOD HAWKE, his novel about a Thomas Wolfe-like novelist, and loved it. I might even reread YOUNGBLOOD HAWKE one of these days, although I probably won’t because it’s so long. I keep picking up a large print copy of MARJORIE MORNINGSTAR at the local library and being tempted to check it out, but again, it’s so blasted long that I haven’t tried to read it yet.
I’m glad I read SLATTERY’S HURRICANE, though. It’s a lot of fun.
Posted by James Reasoner at 2:05 PM

Back when I was a Young Guy, I read several Wouk novels: Youngblood Hawke and Marjorie Morningstar among them. I still remember bits and pieces of both of them. Hawkeimpressed me because it was about a writer and because I was going through a Thomas Wolfe phase at about the same time. Marjorie was one of those big, glossy soap operas, and I read it mainly because I'd just seen the Natalie Wood movie version (and if it was someone else in the movie, don't bother to tell me; I don't want to know). Both books were longer than I'd pick up now, but I remember them fondly, maybe because they remind me of that long-ago time.

Natalie Wood was indeed the star of MARJORIE MORNINGSTAR, along with Gene Kelly. I'd watch the movie, but I want to read the book first, and who knows if I'll ever get around to that.

I read them both long ago and probably still have my copies in a box in my garage. The books I remember best from those days were the "big" ones such as James Farrell's Studs Lonigan trilogy, Michener's The Fires of Spring, several by John O'Hara, James Jones and so on. Today the size of the book usually determines if I will read it. Right now I've just started Nick Stone's Mr. Clarinet and the 500 pages are scaring me off. I managed to find James D. Farrell's "lost" novel titled Dreaming Baseball last week in Grand Forks, ND. At 316 pages it's small enough so I may get to it next.

Many years ago I worked on a bookmobile in San Antonio. I carried CAINE MUTINY out to a shopping center as it was reserved by a library patron. I’d never read it so I picked it up just to scan a chapter or two before the man came in to claim it. Then I got hooked. When he came in for it I kidded him and told him to read it fast because I wanted it next. He told he’d read it a couple of times already and that I should take it home with me, finish it, and bring it to him the following week. Which I did. And yet, oddly enough, I’ve not read anything else by Wouk. I can’t figure it out, either.