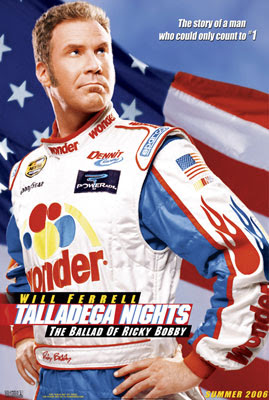 Now, this is my kind of inspirational sports movie. TALLADEGA NIGHTS hits all the usual sports movie cliches, as well as following the standard rise-and-fall-and-rise-again format of countless biopics, but pushes them so far over the bounds of ridiculousness (not to mention tastelessness on occasion), that it’s just hilarious. I think Will Ferrell is one of the most likable actors in the business today and does a fine job of playing utter lunacy absolutely straight. The rest of the cast is equally good: Gary Cole as the disreputable, mostly absent father of Ricky Bobby (Ferrell’s NASCAR driver character), the great John C. Reilly as Ricky’s best friend Cal, Jane Lynch (who seems to be in just about everything) as Ricky’s mother, and Sacha Baron Cohen as Ricky’s nemesis, the gay, French race-car driver Jean Girard. The scenes between Ferrell and Cohen are really funny. I’m not much of a NASCAR fan, but this movie is almost enough to make me want to watch a race or two.

And be sure to watch all the way to the end of the closing credits for the funniest scene in the entire movie. I don’t know what it is about it that’s so hilarious, but I about fell on the floor.
Posted by James Reasoner at 1:19 PM

I doesn't like very much Ferrell's movies, but I like very much those inspirational sports movies and parodies even more. Just the name of the character, Ricky (a clear reference to Rocky Balboa), makes me laugh. Buy Viagra Viagra