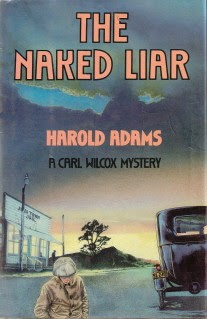 Some years ago I read one of the books in Harold Adams’s series about Carl Wilcox, a ne’er-do-well ex-con sign painter and part-time private eye who lives in a small town in Depression-era South Dakota. At this late date I couldn’t even tell you which book it was, but I recall that I didn’t like it very much.

I generally like Depression-era novels, though, so I thought it was time to try this series again. THE NAKED LIAR is the fourth appearance of Carl Wilcox and finds him living in the run-down hotel owned by his parents in Corden, South Dakota. One of his poker buddies in a neighboring town turns up murdered, smothered to death while tied naked to a bed after what was apparently some sort of kinky sexual encounter. The man’s wife is in jail, charged with the crime, and her sister hires Carl to prove that someone else is the actual killer.

This leads to a nice twisty investigation involving the other poker players in Carl’s circle, assorted attractive women, a variety of out-of-town gangsters, and a judge who may or may not be corrupt. It’s all narrated by Carl in an appealing style full of dry humor and occasional bursts of violence.

There are plenty of good lines and well-drawn characters in this novel, and Adams manages to capture the feeling of the times without going overboard on period details, which I really like. The plot meanders along for quite a while without much happening, which I don’t like. Overall, though, I enjoyed this book enough so that there’s no doubt in my mind I’ll read more in the series.
Posted by James Reasoner at 9:38 AM

I read three from this series way back when, but not this one. I liked all of those I read, however. Can't recall if Adams passed away or disappeared into the author limbo at which I'm beginning to feel at home.