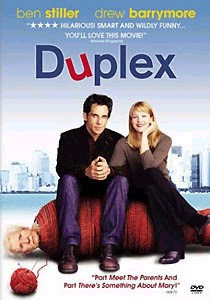 This comedy from several years ago is another one we picked up at the library. Ben Stiller and Drew Barrymore are a cute young couple in New York -- he’s a midlist writer working on his second novel, she works at a magazine of some sort -- who buy a duplex apartment. The little old lady who lives in the upstairs part of the apartment seems sweet at first but turns out to be the Tenant From Hell. And of course, because of rent control laws in New York, they can’t kick her out, so the rest of the movie revolves around their efforts to cope with her eccentricities at first, and then to get rid of her by any means, legal or illegal, when that doesn’t work.

As likable as Ben Stiller and Drew Barrymore are, DUPLEX is only intermittently funny. There’s some amusing, if far-fetched, stuff about the struggles that Stiller’s character faces in his writing career, and his jealousy of a thriller-writing friend of his who is much more successful certainly rings true. Then there’s a decent little twist in the plot at the very end that I didn’t see coming, which is always a plus. This one’s a mildly pleasant way to spend an hour and a half, but not much more than that.
Posted by James Reasoner at 7:35 PM